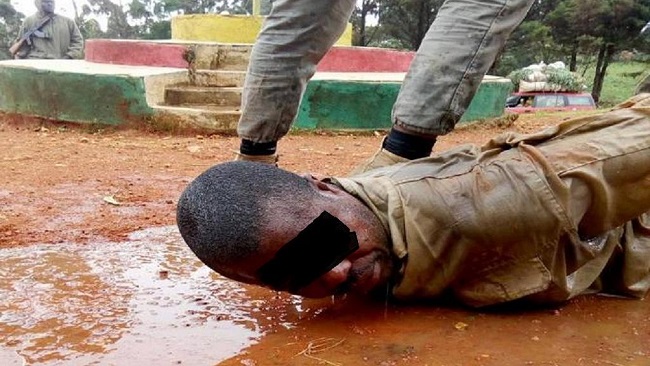 War in Ambazonia: There are no longer any words to describe Southern Cameroons’s horror 0

The senseless war in Southern Cameroons has exhausted all superlatives. Worst day, worst month, worst year, worst ever. To be sure, words can no longer describe the killings currently going on in Southern Cameroons. For the past few days, Cameroon government army soldiers have fired rockets and artillery in many areas in the Northern and Southern Zone.

Over the weekend alone, the French Cameroun government army killed more than 87 residents, including women and children in villages around the Muyuka and Muea districts according to a variety of groups contacted by Cameroon Concord News Group. The two year crisis death toll has now exceeded a thousand.

The state-run Cameroon Radio and Television reported on Monday that separatist’s fire from within the Fako County had killed civilians. However, what we do know is that Cameroon government troops have been responding to attacks from the Ambazonia Restoration Forces with strikes destroying homes and burning down villages.

The desperate situation and the near-total absence of any sign that further violence can be avoided have pushed many Southern Cameroonians to flee to neighboring Nigeria and some to French Cameroun. A Roman Catholic clergy who spoke to our correspondent in Buea wondered aloud if those inflicting the suffering on Southern Cameroons women and children still have words to justify their barbaric acts.

No doubt the so-called United Nations will express concern over the bloodshed, and that is it. Many more Southern Cameroonians will die, with words of sympathy ringing in their ears.