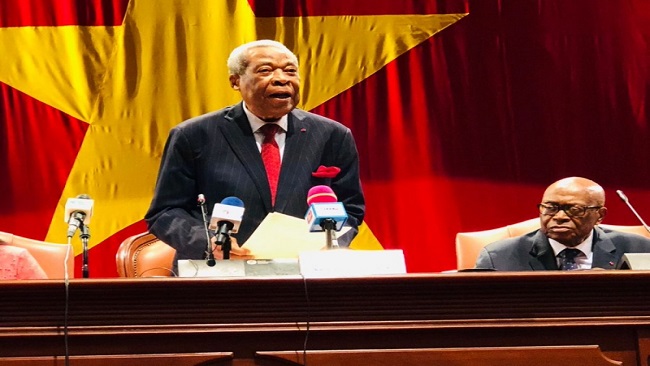 87-year-old Marcel Niat Njifenji was for the ninth consecutive time elected as head of the Francophone dominated Upper House of parliament on Friday, March 18, 2022, after an uncontested election.

As in the National Assembly known as the Lower House, the election of the executive board of the Senate took place without any big surprise, with the renewal of Marcel Niat Njifenji’s mandate as president of the upper house of parliament. Niat was elected with 84 votes out of 87 with 3 invalid ballots.

The barons of the ruling CPDM crime syndicate who have absolute control of the two houses renewed their confidence in Niat for an additional year. This is the ninth consecutive time he has been reelected to this position since 2013.

Like Cavaye Djibril of the Lower House, Niat too is a living corpse and can barely walk!

The consortium of criminal gangs continue to reign unchallenged in both houses, and many political commentators have opined that all the actions that are carried out in the National Assembly and the Senate are known in advance because the MPs and Senators act according to instructions from the presidency of the republic including on issues of national interest.