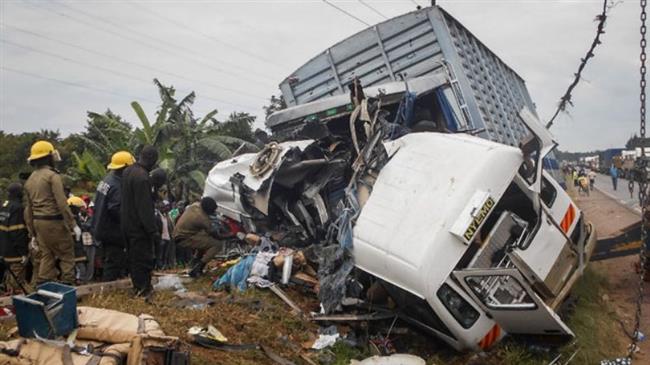 Forty-eight people have died in northern Uganda when a bus hit a tractor driving with no lights at night and then a truck, the Red Cross says, but police put the toll at 22.

But Kayima said 22 people had died, including three children, and 14 had been injured. He said the injured had been transported to Kampala by helicopter for treatment.

The accident was one of the deadliest in Uganda in recent years and happened on Friday night in Kiryandongo, about 220 kilometers north of the capital Kampala.

The bus, which left the town of Lira, first hit the tractor from the back before slamming into a truck transporting beer.

Uganda has one of the worst records for road safety, due to the poor condition of vehicles and roads as well as dangerous driving.

More than 9,500 people died in road accidents in the country between 2015 and 2017, according to figures from the transport ministry, with the situation worsening each year.

A UN report last year said 10 people die on Ugandan roads every day and that road accidents cost the country $ 1.2 billion (about one billion euros) — or five percent of its Gross Domestic Product.

In 2015, President Yoweri Museveni personally sacked 900 officials in charge of building and making roads, holding them accountable for the abysmal state of the network.