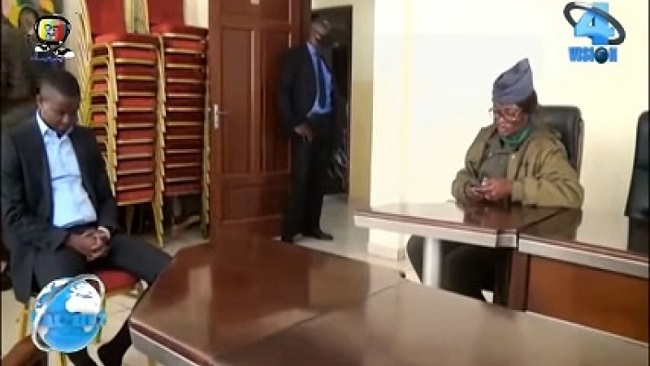 Journalist Ernest Obama pushed for a complete extermination of every living creature who goes by the appellation Anglophone or Southern Cameroonian. He opined that British Southern Cameroonians fled the civil war in Nigeria and were given political asylum in French Cameroun territory by the regime of Prime Minister Andre Marie Mbida. He saluted the humiliating decision by a French Cameroun court against the renowned veteran journalist Peter Esoka and observed that the Bamilekes had a home somewhere else and not in La Republique du Cameroun. Today, from his detention cell at the State Secretariat for Defense popularly known as SED, Ernest Obama is claiming that Cameroon’s security forces are arresting him because he is not in support of Biya’s continued stay in power.

Dieudonné Ernest Obama Nana (to use his four names) the former CEO of the private television channel VISION 4 has been the “shu shu” of French Cameroun billionaire business tycoon Jean Pierre Amougou Belinga with strong ties to President Biya, Paul Atanga Nji Minister of Territorial Administration, Laurent Esso, Minister of Justice and Keeper of the Seal and the controversial Minister Issa Tchiroma Bakary. His televised arrest in Yaoundé has made public the dispute within the Biya family, which has ruled Cameroon for more than 40 years.

Jean Pierre Amougou Belinga owns a business empire in Cameroon, Gabon, Central Africa Republic, Equatorial Guinea and Chad ranging from telecoms to cocoa and coffee, oil and gas trading that no one in Yaoundé and Douala including top officials in the Cameroon secret service cannot explain how it all started! People in the know only say he and Minister Atanga Nji have questions to answer in the CAMPOST Affair. (See Special Criminal Court documents).

Jean Pierre Amougou Belinga is said to be playing a big role in financing President Biya’s war against the people of Southern Cameroons and making sure that the Bamileke LAAKAM mafia do not get hold of the Cameroonian presidency.  Correspondingly, he and his right hand man, journalist Ernest Obama previously viewed as part of the Biya Francophone Beti Ewondo project have now broken ranks.

It follows reports Ernest Obama, considered French Cameroun’s best Mister News and former boss of Vision 4 is being prosecuted by Jean Pierre Amougou Belinga, the business tycoon and owner of the television station, for breach of trust, high treason and embezzlement of company funds.

By some strange happenstance, Vision 4 aired spectacular images of Mister Obama’s arrest and a report detailing the reasons for the judicial action. Ernest Obama is now getting his own share of the drug he gave to the thousands of innocent Southern Cameroonians killed by French Cameroun army soldiers and of course, he will welcome a visit from the Chairman of the National Communication Council, Mr Peter Esoka anytime soon.

His arrest began in an unacceptable way and the Fren ch Cameroun security forces including his former colleagues who filmed the whole scenario also acted in an inhumane pattern.

Did anyone expect French Cameroun security forces would pounce on Mister Ernest Obama who is their biggest supporter and their propaganda mouth piece ever since the beginning of the Southern Cameroons war?

Mr Jean Pierre Amougou Belinga’s action against Mr Ernest Obama is said to have possibly been ordered by Etoudi, who have propped up the Amougou Belinga business empire, while others have said it is the result of a dispute with Mr Amougou Belinga, over who decides who to succeed President Biya.