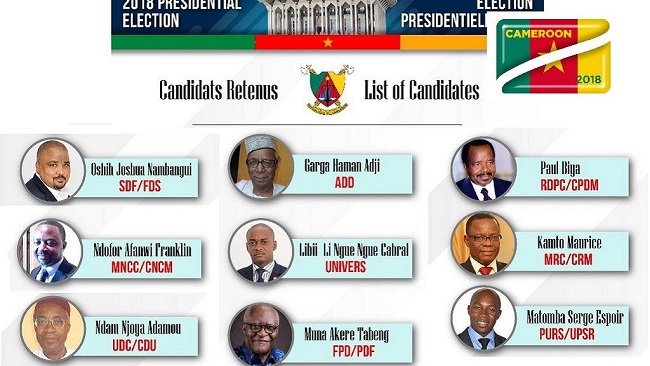 Elections in Cameroon, scheduled for October 7, will be held against a backdrop of uncertainty in the English-speaking regions and amid accusations that the government is planning to rig the polls.

In exactly two months, Cameroonians will be going to the polls to elect their president. Twenty-eight candidates are in the running, including 86-year-old incumbent Paul Biya, who has been in power for 36 years. He is Africa’s second longest serving leader after his neighbour Teodoro Obiang Nguema of Equatorial Guinea.

But there are doubts inside and outside Cameroon that this election will be free and fair, especially in the Anglophone regions in the west, bordering Nigeria, which have been in turmoil for the past two years, when residents started to press their claims for more autonomy or even independence. According to the United Nations, 200 000 people have been internally displaced and 40 000 have sought refuge in neighbouring countries.

Polls amid the mayhem

Among those who fled violence is 8-year-old Kum Vitalis who cried when media asked him about his life now: “They didn’t pay my father and there was no money for school fees or food in the house. That is why they brought us to safety here. When it gets better, they will take us back. They have been shooting people inside their houses and they are just dying like that.”

The government denies having any role in the atrocities taking place in the region. But both the UN and non-governmental organisations such as Human Rights Watch have filed reports on crimes against humanity by armed rebels and government troops. Fifty-four-year-old teacher Ngum Julius, who fled the English-speaking town of Njinikom, believes elections cannot be held there.

Cameroon is also dealing with attacks by Boko Haram militants in the north, and a spillover of violence from the Central African Republic.

Scepticism about the elections is not limited to the Anglophone regions in the country. In Bonamoussadi, a student residential area of the capital Yaounde, young people say that they should be discussing football instead of wasting time with elections, because the process is not working anyway. Tatah Hans is one of them. “I am a Cameroonian. It is normal to vote. I have to vote. But I am facing so many difficulties because very soon they will start voting and I don’t have a voter’s card. I don’t know what to do,” he told media.

Voter apathy is evident; only seven million of a total of 13 million voters have actually registered to cast their ballot. But supporters of Paul Biya, like Jacques Fame Ndongo, say elections will go ahead despite the rebels’ attempts. “We know that their mad dream is to stop the organization of the presidential election in those two regions, but that mad dream will never come to fruition because the population of the Northwest and the Southwest regions is determined to express its total support to the head of state and his party, the CPDM (Cameroon’s People Democratic Movement),” he said.

Meanwhile, the main opposition political party, the Social Democratic Front (SDF), cautions the government against fraud. Denise Nkemlemo, the SDF’s communication secretary, says the election management body has already started to break the law, for instance by setting up voting stations where they shouldn’t: “We are not supposed to have voting stations inside the presidency; military camps are also out of the question,” she said. According to Nkemlemo, at polling stations in those places in previous elections, CPDM’s votes outnumbered those for the SDF by a wide margin. “When our representatives wanted to raise questions, the military came with guns and told them “we don’t make noise here.” The SDF will not tolerate the lack of respect of the electoral law,” she added.

These claims are rejected by Enow Abrams Egbe, the electoral body’s board chair, who says critics have ulterior motives. “It is normal that detractors play their game, but we are playing our role with serenity and everything is moving on smoothly,” he said.