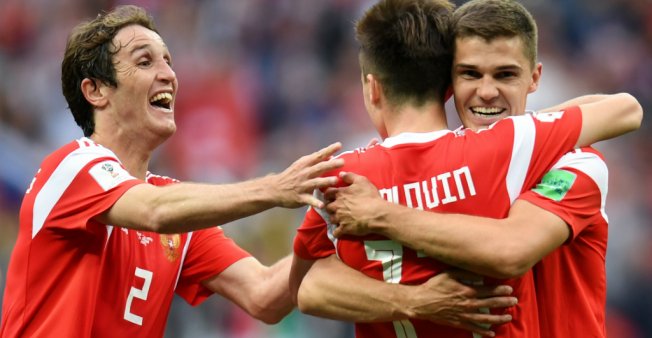 After defying expectations with decisive wins in their first two games, guaranteeing their position in the knockout rounds, World Cup hosts Russia face their biggest challenge yet on Monday as they take on Uruguay.

Russia went into the tournament with the lowest FIFA ranking of all the 32 participants, at number 70, behind such teams as Scotland and Burkina Faso.

But the team shocked critics with a resounding 5-0 thrashing of Saudi Arabia in their June 14 opener, before crushing Mohamed Salah’s Egypt 3-1 on June 19 – allowing Russia to get out of the group stage for the first time since they played as the Soviet Union in 1986.

‘We did our homework’

Russia manager Stanslav Cherchesov has argued that the team’s success is due to more than a home-country advantage. “It is not an accident that we have two wins under our belt,” he said. “We did our homework. We learned from our mistakes that didn’t allow us to be successful in the past.”

The performance of the team’s top scorer, Denis Cheryshev, is symbolic of Russia’s shock success. Before the World Cup, the Villareal striker had failed to score a single goal in his 11 appearances for the national team. But he has become Russia’s top scorer of the tournament so far, netting three goals – including an outstanding lob of the Saudi keeper from just inside the box.

Cheryshev is not the only overlooked Russian player to impress. Midfielder Aleksandr Golovin had done little to attract the attention of Europe’s top clubs since joining the CSKA Moscow first team in 2014, but played a pivotal role in Russia’s 5-0 crushing of Saudi Arabia, with one goal and two assists.

Similarly, Golovin’s midfield colleague Roman Zobnin went into the World Cup after two undistinguished years at Spartak Moscow, but gave a remarkably protean performance against Egypt, attacking and tracking back with equal skill, winning 10 out of 14 duels.

However, Uruguay are likely to be much tougher opponents than Saudi Arabia or Egypt. The team boasts a formidable attacking partnership, combining the menace of Barcelona striker Luis Suarez (110 goals in 130 matches for his club) with the poaching proficiency of PSG forward Edinson Cavani (116 goals in 165 matches for his).

The South American team stands at 14th place in the FIFA rankings and came second in the CONMEBOL qualifiers, despite Suarez’s absence in the first four matches and that of Cavani in the first two.

That said, Spain and Portugal – one of which Russia will likely face in the second round – are even more impressive sides. The former retain much of the distinctive ‘tika-taka’ approach that brought them to World Cup victory in 2010, while the latter side is centred around Cristiano Ronaldo, widely considered one of the greatest players of all time.

If the World Cup hosts beat Uruguay before defeating one of the Iberian teams in the second round, Russian President Vladimir Putin’s 2010 statement that he expects his country to lift the trophy on home soil will no longer seem quite so fanciful.