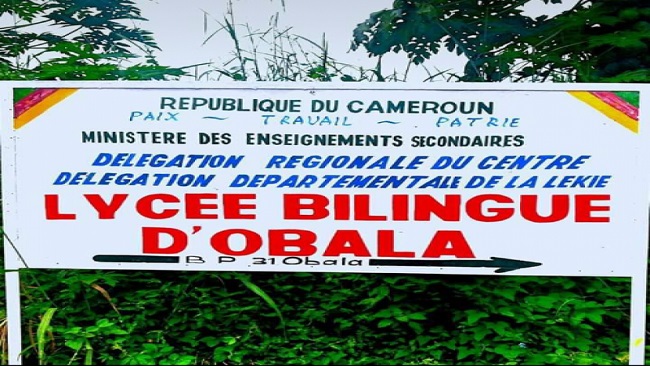 Mbappe Arnold Alexandre, Student of Government Bilingual High School, GBHS, Obala in the outskirts of Yaounde, is currently receiving emergency medical attention at the Obala District Hospital after his finger was chopped off by his classmate with the aid of a machete.

The incident happened Wednesday, January 15, 2020 at the campus of “Lycée Bilingue d’Obala” (GBHS Obala) in the Lekie Division of Cameroon’s Centre Region after an altercation during a football match.

Mbappe Arnold Alexandre is seen on a hospital bed with blood oozing out of his left hand as a medic attends to him. His left thumb is shown lying in a plate close to him. He says he had a disagreement with his classmate on a football pitch and the classmate decided to engage him in a fight. The said classmate was later given a machete by other students with which he committed the chilling act.

From his hospital bed, the victim explains: “We were cleaning up the campus given that the Delegate (apparently the Divisional Delegate of Secondary Education for Lekie Division) was supposed to visit. We were playing football in the school field when I engaged my classmate in a ‘rough tackle’ in an attempt to get the ball. I quickly explained to him that it was not intentional. But he hit me and that is how a fight started. Other students then came in. I don’t know when he got hold of a machete. I only saw when he raised the machete against me. I raised my hand to block the machete. That is how the machete cut off my left thumb. He then escaped.”

We get from the said video that Mbappe Arnold Alexandre was rushed to the Obala District Hospital by other students and medics immediately attended to him without any preconditions.

Wednesday’s incident comes few hours after a student of GHS Nkolbisson brutally murdered his Mathematics teacher. On Tuesday, January 14, 2020, Njomi Tchakounte Boris Kevin, a Mathematics teacher at Government High School Nkolbisson was stabbed to death by a Form 3 student, a release from the cabinet of the Minister of Secondary Education said.

The 15-year-old male student is now under police custody. Preliminary investigations and eyewitness accounts suggest that after days of premeditating the murder, the drama unfolded Tuesday as students watched on.

The student is said to have had a disagreement with the teacher, promising to knife the teacher Tuesday, according to testimonies from some students in the presence of the Minister. In an attempt to call the student to order at the start of his lesson, the teacher unfortunately went physical with the unyielding student who pulled out a knife hidden under his uniform and stabbed the 26-year-old teacher who later died at the Yaoundé University Teaching Hospital (CHU).  The student is said not to be a first time offender, reportedly dismissed from previous schools.

The Minister of Secondary Education, Prof. Nalova Lyonga had following Tuesday’s incident said the problem of indiscipline stands out as one of the challenges to stakeholders in her ministry. It is not known what measures government will take to stem such dangerous tides.