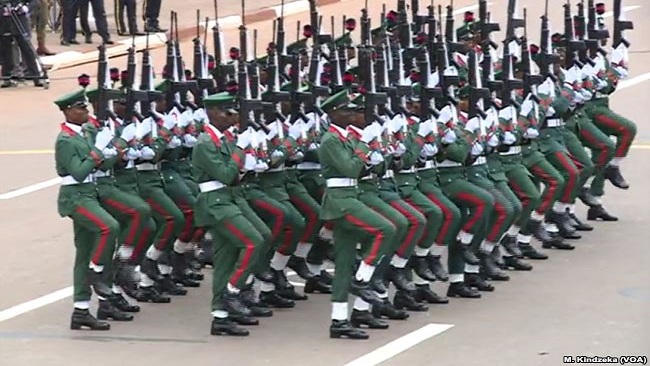 A Nigerian military contingent — part of the Cameroon effort to fight a Boko Haram insurgency — sang before Biya, cabinet ministers, diplomats and thousands of people during the National Day parade in Yaounde.

Nigerian Lieutenant Colonel Mochtar Sani Daroda said the soldiers were invited by Biya to participate as recognition for their fight against the militant group that has left 25,000 people dead and more than 2.6 million displaced in Cameroon, Nigeria, Chad and Niger.

“The class brigade is the elite brigade that carries out national functions on behalf of the Nigerian army,” Daroda said. “They also provide security of the president and the entire federal capital city [Abuja ] and they have been selected to participate in one of the parade we hold in very high esteem. A very special corps to take part in your [Cameroon] parade.”

But tensions flared in many towns and villages of Cameroon’s English-speaking regions, including Konye, Batibo, Ekona and several villages.

At least two policemen and several people were killed.

In a recording provided by suspected separatists, Mayor Ekuh Simon of Bangem, an English-speaking town in southwest Cameroon, said he was kidnapped with his deputy for distributing uniforms for residents to march in National Day ceremonies. Separatists had called for a boycott of events.

Simon said he is being held by Ambazonia restoration forces.

Ambazonia is what separatist’s call their self-declared republic in the English-speaking regions of Cameroon.

Ngu said his house was attacked. “Some boys saw my father inside the house, attacked my father. I lost my father because of this crisis,” he added.

Biya’s government had asked people to come out in numbers to celebrate National Day as a sign of unity.

Tensions in Cameroon began in November 2016 when English-speaking teachers and lawyers protested, saying they were frustrated with the dominance of the French language and the marginalization of the Anglophone population.

The crisis intensified early this year when separatist leader Ayuk Tabe was arrested with 48 others in Nigeria and extradited to Cameroon.

International rights groups have condemned the harsh government crackdown on the English speaking regions and indiscriminate arrests of suspects.