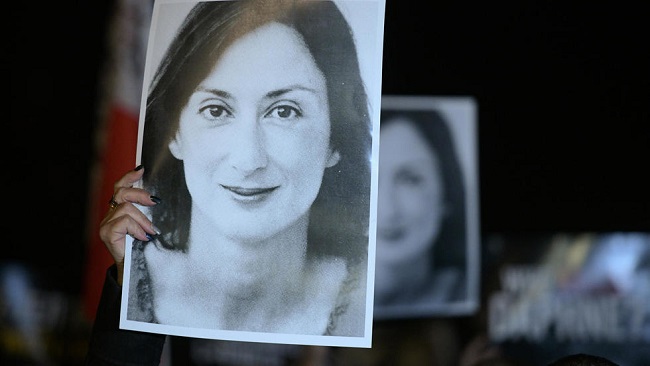 Maltese police on Friday re-arrested a tycoon in connection with the murder of investigative journalist Daphne Caruana Galizia, just hours after releasing him on bail, police said.

Yorgen Fenech had been detained on his yacht at dawn Wednesday after attempting to sail away from Malta, the day after Prime Minister Joseph Muscat promised to pardon an alleged middleman if he named the person who ordered the attack.

Investigators have described him as “a person of interest” in the 2017 murder of the blogger, who reported on corruption, including alleging links between high-level politicians and a company that it later transpired was owned by Fenech.

Under Maltese law, police had 48 hours to interrogate and then charge or release him. He was released on bail late Thursday then re-arrested Friday, a police source told AFP.

Caruana Galizia, described by supporters as a “one-woman WikiLeaks”, was blown up in a car bombing at the age of 53 near her home in the small village of Bidnija in northern Malta.

Her family welcomed Fenech’s arrest, but said Muscat’s office was implicated in the case and that he should distance himself from the investigation.

Muscat told reporters that police would initially have liked more time to probe new leads, but had been rushed into arresting Fenech after he attempted to leave the tiny Mediterranean island on his sleek blue and white yacht.

Friday’s re-arrest buys them another 48 hours.

Fenech, who is from a wealthy family with a sprawling business empire from energy to hotels, was also being questioned Friday over possible links to money laundering and drugs, the police source said.

Caruana Galizia had written in her blog about 17 Black some eight months before her death, alleging it had connections to Maltese politicians.

– ‘No place near investigation’ –

Fenech’s arrest prompted calls for Muscat’s resignation over the long-running case, which sparked outrage around the world and has raised questions about the rule of law in Malta.

Civil society groups and Maltese journalists on Friday slammed the lack of police press conferences and Muscat’s decision to “shoulder the responsibility” for informing the public on updates in the case.

“The arrest of Yorgen Fenech is an important and overdue development in the investigation into our wife and mother’s assassination,” the Caruana Galizia family said in a statement.

But it added that the prime minister had “no place near the investigation”, and it was “prepared to use all legal means at our disposal to ensure that the investigation is independent and impartial, and that it runs its full course”.

The alleged middleman in the case, taxi driver and loan shark Melvin Theuma, who was arrested last week, was hospitalised Friday for an unknown medical complaint but his condition was not serious, Muscat said.

Security was tightened at the hospital after the 41-year old was admitted, he said.