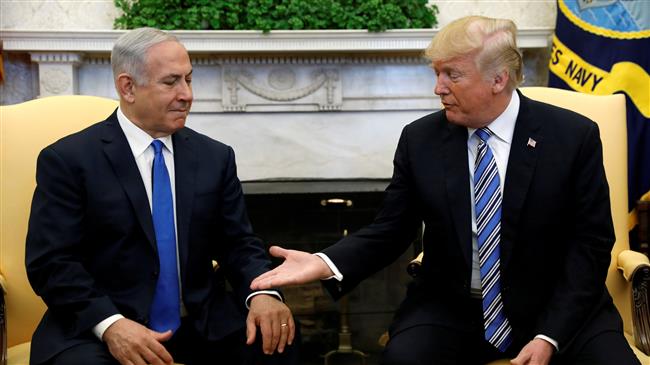 Israeli Prime Minister Benjamin Netanyahu has arrived in Washington for a meeting with US President Trump, deliver a speech to America’s biggest pro-Israel group and resume his critique of the Iran nuclear deal, even as a corruption scandal involving Netanyahu grows in Israel.

Trump and First Lady Melania Trump greeted Netanyahu and his wife Sara outside the South Portico of the White House shortly after 12:00 pm on Monday.

Netanyahu is expected to encourage Trump to counter Iran in Syria and express his concerns about the Iran nuclear agreement signed during the administration of former US President Barack Obama.

A warm welcome at the White House, and a speech to a receptive audience at the American Israel Public Affairs Committee (AIPAC) could distract Netanyahu momentarily from the graft allegations in Israel.

The visit comes as both Trump and Netanyahu face politically damaging investigations but Netanyahu finds himself in a far more precarious position than Trump.

Israeli police say they have enough evidence to indict Netanyahu on bribery, fraud and breach of trust in two cases, and the attorney general there is deciding whether to file charges, a process that could take months.

The prime minister’s visit to Washington follows the US president’s announcement that Washington recognizes Jerusalem al-Quds as Israel’s capital and plans to move the American embassy in Israel from Tel Aviv to the holy city.

“Many presidents were discussing whether or not to make that decision, and they promised it in their campaigns but they never were able to do what they should have done so I was able to do it,” Trump told Netanyahu.

Trump also told reporters that he may visit Jerusalem al-Quds as work begins on the new embassy in that city expected to open in May.

Netanyahu hailed Trump’s decision as “historic,” saying it would be “remembered by our people through the ages.”