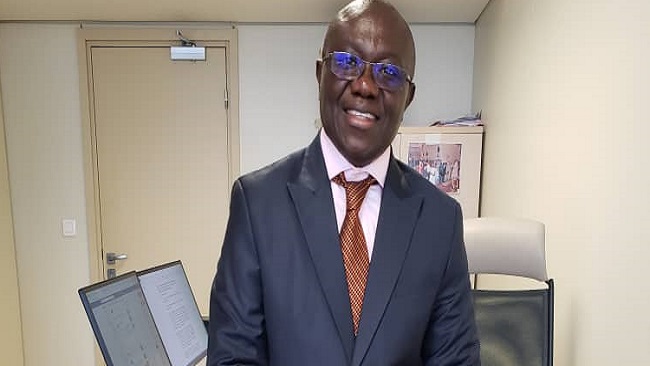 Cameroon is going through the toughest moment of its life and the future looks bleak as the Central African country deals with multiple crises. The country’s economy is facing tough times and the level of employment is very high. But it is the Anglophone crisis that is the government’s toughest challenge. The country’s president, Paul Biya, recently addressed the nation and called for a national dialogue that should help the country heal. After the address, staff lady Chi Prudence Asong spoke with Dr. Joachim Arrey, a writer, who has continued writing on how the government could proceed to end the crisis that has resulted in the deaths of many people and he had this to say.

Cameroon Concord News: What is your impression about the president’s address to the nation?

Dr Arrey Jaochim: I think it was an opportunity to reassure Cameroonians. The address comes a bit too late, but better late than never. The president should have done this a lot earlier to spare the country and the international community the horror movie that has been playing out in the country’s two English-speaking regions for almost three years. The country’s economy has been hurt, many people have been displaced and thousands have lost their lives in a conflict that could have been prevented. However, I think we should be forward-looking. Many mistakes have been made, but I think the call for dialogue is an opportunity for Cameroonians to take a long and hard look at their country’s past to figure out how to address those issues that have brought untold hardship on the people. It is also an opportunity to address the Southern Cameroonian issue once and for all.

Cameroon Concord News: The dialogue has already begun as the Prime Minister has been receiving many delegations to obtain their views. It has been announced that the main event will start on 30 September. What do you think about the government’s approach?

Dr Arrey Joachim: I think the government is doing something, but the population is simply not happy with what it is doing. It is a good idea to receive opinions from political parties and traditional leaders, but it should be pointed out that Southern Cameroonians who have triggered this dialogue do no longer trust their politicians and traditional leaders, most of whom have escaped to East Cameroon as a result of the conflict. This conflict is born out of frustration and marginalization and the government should understand that certain measures need to be taken now to instil confidence in the English-speaking minority if it wants its dialogue not to end up as a deadlock.  The truth is that those who have financed this revolution are living abroad and the best the government can do is to head to those countries and try to negotiate. The government itself has lost credibility and those living abroad will never take it seriously. The government needs to seek a mediator who must be impartial and objective to ensure that the country does not end up with a deadlock on its hand. That is why many people around the round still express fear and doubts as to the government’s sincerity in organizing a dialogue. The government seems to be playing the role of a judge and jury at the same time.  I would advise that the United Nations be given a chance to play an important role so that Southern Cameroonians can feel that there is a neutral third party involved. If Mr. Biya really wants peace to return to Cameroon, then he must yield a lot of ground and must yield to calls for an international mediator.

Cameroon Concord News: But the president did also say that there was nobody to discuss with and that has been the issue facing the government for all these years.

Dr Arrey Joachim: I think Mr. Biya is frozen in time. He is of the opinion that he knows it all and the other Cameroonians are not smart enough to generate any good idea. If he had listened to many people just when the crisis started, we would not be where we are today. If he had addressed the nation using the right words at the beginning of the crisis, more than 2,000 lives would have been spared. Saying that he cannot find someone to dialogue with only makes him sound ridiculous. He seems to be looking for a solution that is already in his bedroom. As far as Southern Cameroonians are concerned, Julius Ayuk Tabe is their president and a poster boy of the rebellion. Besides Julius Ayuk Tabe, there are many other leaders in jail. If ?r: Biya were serious about this dialogue which I am considering as a deadlock, he would grant general amnesty to all those arrested during the crisis as well as people living abroad who have been directly or indirectly linked to the crisis. This will not only be a goodwill gesture, but a clear signal that he wants things to return to normal. History is littered with stories of people who have negotiated for their groups while in jail. Nelson Mandela did it for South Africans and Julius Ayuk Tabe can also do it for Southern Cameroonians.

Cameroon Concord News: But it is held that Mr. Julius Ayuk Tabe and Co. are terrorists because of their role in the rebellion.

Dr Arrey Joachim: I think it is time to change the rhetoric. If the government continues to use the anti-terrorism law to eliminate its opponents, nobody will ever have confidence in it. Julius Ayuk Tabe and others arrested in the context of this conflict are not terrorists. They are freedom fighters who truly hold that the Yaounde system needs to change. They hold that Southern Cameroonians have been marginalized for too long and despite all the peaceful means used over the last four decades to draw the attention of the government to the sorry plight of the people of Southern Cameroons, the Yaounde government has continued to argue that there is no marginalization in Cameroon. The best any reasonable person can do is to listen to those who are complaining. Killing and jailing them will not cause the problem to go away.  The anti-terrorism law should not be used by the government to push the country into conflicts that are sapping its economy of its vitality. For real development to take place in Cameroon, there must be peace. The government of Cameroon must live up to the expectations of its people. It must sow the seeds of peace and must understand that a government is not chosen for it to oppress its people, but to create the right conditions for its citizens to prosper and live life in a peaceful environment.

Cameroon Concord News: Will you attend the national dialogue in Yaounde?

Dr Arrey Joachim: Personally, I do not need to be physically present in Yaounde for me to contribute my ideas. I have been writing for decades to let the government know that something is broken and needs to be fixed. My role as a writer is to inform and admonish, where necessary. It is also up to the government to accept what I say or write. But it now knows that failure to listen could lead to the type of disaster the country has witnessed over the last three years. As far as I am concerned, the government should ensure that the Diaspora is properly represented. However, I don’t know how that will happen as Mr. Biya and his government are still threatening the Diaspora with arrests. The Yaounde government needs to fix its relationship with the Diaspora. The Diaspora has the resources to destabilize Cameroon for a long time. If the government really wants to succeed, then it must send delegations to London, Washington and Toronto to meet with those who can help Cameroon return to the path of peace. I know you will be surprised that I have mentioned Toronto and not Ottawa, but I would be quick to add that Toronto is where the money has been coming from. If you need to address the right crowd, then the Greater Toronto Area is where you should be, as many successful Cameroonians have settled in places like Brampton, Mississauga and Ajax which constitute the Greater Toronto Area and most of them are in the private sector and have the resources to keep Yaounde politicians awake all night.

Cameroon Concord News: Which other group of people would you recommend for the national dialogue?

Dr Arrey Joachim: I would recommend religious leaders and activists. These groups of people can make or mar the national dialogue. Religious leaders are much respected in Southern Cameroons. Their views should be taken seriously. Activists also have a huge following.  If the government wants them to change their perspective and their rhetoric, then it must stretch a hand of friendship to journalists and activists. When you need peace, you must bend over backwards to have it.

Cameroon Concord News: Will you be willing to work for the government so that you can share your views with the authorities?

Dr Arrey Joachim: I will continue to use all the platforms available to me to share my perspective. I do not need to work for the government for my views to be known. I have been writing and will continue to do so for a long time. As a writer, my role is to inform and not to be a bureaucrat. There are other Cameroonians who can deliver more than me. I prefer to be on the sidelines to draw the government’s attention to mistakes that may cause our country to implode, but I will always do so in all objectivity and honesty.  That is my role and I love to play it.

Cameroon Concord News: Thank you Dr. Joachim Arrey for sharing your thoughts with us.