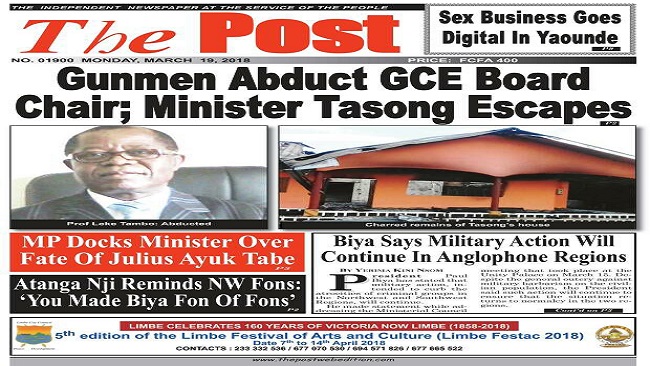 Southern Cameroons Crisis: At your own risk 0

The Southern Cameroons crisis that started with strikes by lawyers and teachers in October 2016 has sent the country in a downward spiral. Before this crisis, Cameroon was touted around the world as one of the most peaceful and growth-oriented nations on the continent. The country’s natural and human resources, as well as its strategic location in the Central African region, have always given it a privileged position on the continent. But this now belongs to the past.

The Southern Cameroons crisis has thrust the country into the spotlight for all the wrong reasons. The crisis is gradually eroding the country’s economy and being the engine of the sub-region, Cameroon is dragging the entire sub-region into an economic and financial abyss. The country’s English-speaking region that has always accounted for a sizeable portion of the country’s gross domestic product has witnessed a significant decline over the last two years.

For many who have been directly affected by the conflict, especially in Manyu Division in the South West region, Nigeria remains their first port of call as it is close, and they do not require a visa to travel to the continent’s most populated country. But their destinations of choice remain the United States and Canada which are countries which have, for decades, opened their doors to people fleeing persecution in their homeland.

Today, there are over 50,000 Southern Cameroonians living in squalor and facing tough economic times. Many of them are at the mercy of Nigerian authorities and Southern Cameroonian groups abroad that have been extending a hand of charity to them. The Yaoundé government has not shown any remorse for causing its own population to seek asylum in a foreign country and this is drawing a lot of flak both at home and abroad.

The refugee crisis is gradually becoming a huge concern to Nigerian government officials, as hordes of English-speaking Cameroonians show up every day, complaining about Cameroon government brutality that has left not less than 500 civilians dead and hundreds homeless in towns where government troops have resorted to collective punishment as a means to send home a strong message to the population that is clearly sympathizing with Southern Cameroonian fighters who have, over the last six months, given the cash-strapped Cameroon government a run for its money.

But it is the insecurity in the English-speaking regions of the country that is a huge concern for many people. After more than 17 months of turmoil, the government is still in denial that there is a serious issue that might threaten the country’s integrity.

Last week, a Manyu traditional authority in the Awanchi-Betieku clan was among the latest casualty in the war against Southern Cameroonians; a war that has already claimed hundreds of lives since the country’s President, Paul Biya, launched an anti-secessionist war last year. The chief was accused of cooperating with the enemy – the government of Yaounde.

It is alleged that Chief Boniface Atchu Njang of Mbeme had even brought in security officials to his village to arrest some young men he suspected of sympathizing with the secessionists. He did not know he was doing that at his own risk as secessionists have gained grounds and the cash-strapped Yaounde government is incapable of providing security to local administrative authorities who are seeking to help put an end to the conflict that has spiraled out of control.

Cameroon government sources have reported that Chief Boniface Njang was on board a government patrol vehicle when motorcycle-riding suspects fired at him. Cameroon Concord News Group informant said Chief Njang succumbed to multiple gunshot wounds to his head and body.

Meanwhile, on Saturday, March 18, 2018, suspected separatists abducted a top civil servant, Professor Leke Tambo, who was on his way to his native Alou, Lebialem Division, where he was supposed to celebrate his appointment as the chairperson of the country’s G.C.E Board.

Professor Leke was supposed to join other newly appointed government officials to celebrate their appointments but their party was cut short. He has been charged with human trafficking and importation of foreigners into the country – Ambazonia – without the visas. A video of him being naked has been circulating on social media under the control of Anglophone restoration forces.

Government authorities have not yet confirmed Professor Leke Tambo’s abduction, the latest in a slew of abductions in recent weeks. Last month, an official of the ministry of social affairs was also kidnapped in the northwest city of Batibo.

There is increasing tension in the country’s English-speaking regions which account for about a fifth of the country’s population since separatists declared the independence of the self-proclaimed Republic of “Ambazonia” on October 1, 2017.

The government has also been silent on an attack reported on Saturday by security sources in the southwest town of Alou by unidentified assailants on a convoy accompanying Economy Minister, Paul Tasong.

Social media footage has shown an attack on a bus carrying some 30 people by armed members of the self-declared Ambazonia Defence Forces. The latest attack came a day after newly-appointed Interior Minister, Paul Atanga Nji, embarked on a 48-hour “peace mission” to the north west region of the country.

A message sent to the Cameroon Concord News Group’sglobal headquarters in Coventry, UK, by a leader of the Ambazonian Defence Forces who have charged Prof. Leke Tambo of human trafficking and importation of illegal immigrants into the Republic of Ambazonia said “the people’s court will try Prof. Leke for his crimes. He has been collaborating with the enemy and this carries the death penalty.”

“He should have known that he was running a huge risk. Helping to run election campaigns for the enemy in our country is a serious crime. Prof. Leke has been backing the wrong horse and he should be made to pay the price. The party he supports is foreign to our country and it is widely considered as a crime syndicate. He should have known this and he should have understood that things have changed. Ambazonia is an independent country and we are going to do our best to ensure we remain independent of the other country that is being ruled by an 85-year-old president who does not love his country. We will not allow that madness to be brought over into our country,” the message said.

“We will continue to turn the heat on the Yaounde government until it tells us where our leaders are. They have been held incommunicado for almost two months and this is against international law. Our fight against the brutal Yaounde regime has entered a new phase. Anybody collaborating with the enemy is a target. Until we see our leaders on TV or in a duly constituted court, we will continue to take administrative officers and their collaborators as captives. They are enemies of the people. Any of them coming into our territory to preach the wrong political philosophy will be doing so at their own risk,” the message stressed.

“We have declared that there will be no elections in the Republic of Ambazonia. Anybody who thinks he can challenge us will be doing so at their own risk. Anybody who belongs to the ruling CPDM party is now a target. We are yet to build jails and due to a lack of penitentiary facilities in our new country, we will be disposing of our captives in a manner that will be far from being fair. These people have brought untold hardship to our people and they do not deserve any sympathy,”the message underscored.

Cameroon has been caught in a downward spiral. While its economy is on a tailspin, the country’s security is calling for a change of strategy on the government’s part. If the government thinks it can win this war anytime soon, then it is still living in the past. The country is now awash with arms and the separatists are determined to render the English-speaking part of the country ungovernable and they are clearly matching words with action.

The government still has time to negotiate. For long, it has taken a tough approach that is not producing any promising results. Hundreds of army soldiers have been rushed into an early grave, while thousands of civilians continue to flee their homeland because of government brutality.

The government still has some leverage. Its convening power can make it possible for both parties to sit at the table and work out an agreement that will restore peace and security in the two restive English-speaking regions. It is in a position of strength, especially as it has Southern Cameroonian leaders in its custody. This is indeed the time for it to head to the negotiating table. But it will soon lose that privileged position as separatists capture and kill their captives.

It will not be in the government’s interest to head to the negotiating table in a position of weakness. Now is the time to talk and the dialogue must be inclusive and sincere. Until that happens, any government official operating in Southern Cameroons will be a target and any CPDM parliamentarian or senator is vulnerable. Campaigning in the region for the upcoming elections will be one huge mistake and anybody doing so will be doing so at their own risk.