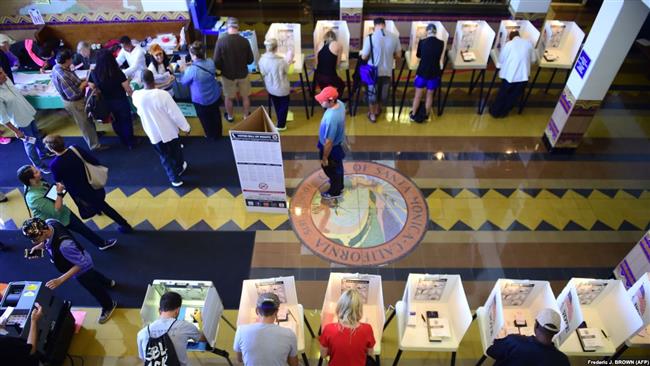 US President Donald Trump has dissolved a special commission which was established to investigate widespread voter fraud in the 2016 presidential election.

The White House announced in a statement on Wednesday that Trump decided to break up the Presidential Advisory Commission on Election Integrity led by Vice President Mike Pence and Kansas Secretary of State Kris Kobach after several states did not cooperate with the panel.

White House spokeswoman Sarah Huckabee Sanders said that “rather than engage in endless legal battles at taxpayer expense,” Trump abolished the commission made up of Republicans and Democrats.

The commission was created in May last year after Trump claimed that 3 to 5 million immigrants voted illegally in 2016, depriving him of a popular-vote victory against Democratic presidential nominee Hillary Clinton.

In June, the commission’s vice chair, Kris Kobach, an advocate of tougher laws on immigration and voter identification, demanded that states turn over voter information, including names, addresses, birth dates and the final four digits of social security numbers.

Over 20 states refused to do so and others said they needed to study whether they could give the data.

The Republican billionaire, who was inaugurated last year as the 45th president of the US, scored about 3 million votes less than Clinton in their November 8, 2016 face-off. However, he was able to seal the victory by winning the Electoral College vote, 304-227.

In the run-up to the presidential election, Trump repeatedly accused the mainstream media of bias for not covering “a large-scale voter fraud” underway during early voting across the country. In addition, he called the election process rigged, and said the media was colluding with Clinton in order to beat him.

According to Trump, there were “serious voter fraud” issues in three US states — Virginia, New Hampshire and California — during the election, but the mainstream American media ignored it.

“The claim of widespread voter fraud in the United States is in fact, fraud. The demise of this commission should put this issue to rest,” said Michael Waldman, president of the liberal Brennan Center for Justice.

Meanwhile, Senate Minority Leader Charles Schumer (D-N.Y.) hailed the dissolution of the panel, calling it a “front to suppress the vote, perpetrate dangerous and baseless claims” that “was ridiculed from one end of the country to the other.”