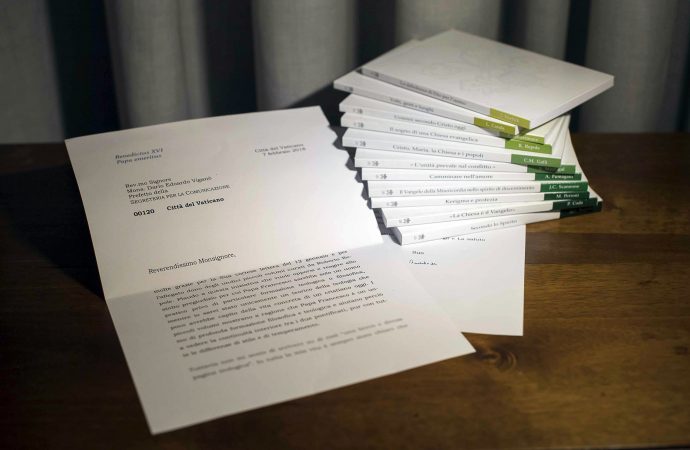 The Vatican bowed to pressure Saturday and released the complete letter by Emeritus Pope Benedict XVI about Pope Francis after coming under blistering criticism for selectively citing it in a press release and digitally manipulating a photograph of it.

The previously hidden part of the letter provides the real explanation why Benedict refused to provide commentary on a new Vatican-published compilation of books about Francis’s theological and philosophical background that was released to mark his fifth anniversary as pope.

Benedict noted that one of the authors involved in the project had launched “virulent,” ”anti-papist” attacks against his papacy and teaching. He said he was “surprised” the Vatican had chosen the theologian to be included in the 11-volume “The Theology of Pope Francis.”

The Vatican’s Secretariat for Communications said Saturday it was releasing the full text of the letter due to the controversy over the “presumed manipulation” of information when the volume was launched Monday, on the eve of Francis’s anniversary.

It said its decision to withhold part of the letter at the time was based on its desire for reserve “not because of any desire to censure.”

The so-called “Lettergate” scandal has embarrassed the Vatican for the past week and fueled the growing chasm between supporters of Francis’s pastoral-focused papacy and conservatives who long for the doctrine-minded papacy of Benedict.

A Twitter hashtag #releasetheletter went viral among Catholic conservatives as the scandal widened.

The Secretariat for Communication, in particular, was accused of spreading “fake news” for having omitted key parts of Benedict’s letter and – as The Associated Press reported – digitally blurring a photograph of the document where Benedict begins to explain why he won’t comment on the book.

The scandal began when the prefect of the office, Monsignor Dario Vigano, read part of Benedict’s letter aloud at the book presentation Monday. In the parts Vigano chose to read, Benedict confirmed that Francis has a solid theological and philosophical training and he praised the book initiative for showing the “interior continuity” between the two papacies.

But Benedict’s full caveat was never made public in the press release or the photo, leaving the impression that the 91-year-old retired pope had read the volume and fully endorsed it, when in fact he hadn’t.