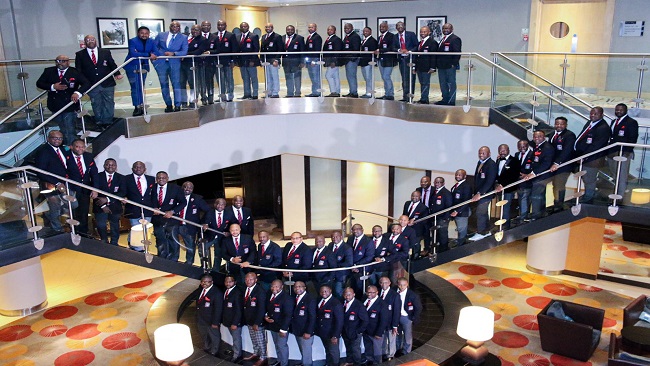 From November 1 to November 3rd, more than 300 guests gathered in Colchester with the Sasse Old Boys Association for the 2019 SOBA UK Residential Convention. The SOBA UK show is the biggest and oldest Anglophone Cameroon academic exposition in Europe, and this year the Five Lakes Resort was packed solid as a sea of people enjoyed the SOBA UK annual come together for three days.

According to a study done by the Cameroon Concord News Group, a cross section of the non-SOBA UK participants that attended the SOBA UK 2019 Residential Convention this year were from main land Europe, Russia, Ireland and the United States of America.

Egbe Franklin the new SOBA UK leader observed, “There’s no better way to end the year in Europe than at the annual SOBA UK Residential Convention. It’s the most cost-effective way for families and friends of SOBA UK to communion in truth and in brotherhood.”

The renowned DJ Takeaway was a new exhibitor at the SOBA UK 2019 Residential Convention this year. “It’s been a good experience for me,” he said. The SOBA UK AGM gave attendees a prime opportunity to keep abreast of the latest policies mapped out by the new SOBA UK team to move the association forward.

SOBA UK 2019 Residential Convention attendees browsed the rooms and the golf course of the Five Lakes Resort finding new ideas and discussed some of the difficulties confronting the association. Another unique feature of the 2019 SOBA UK Show was the Synergy Live Band, which put up a wonderful display honoring SOBA UK members who have worked for 10 or more years to make SOBA UK great.

President Emeritus, Akoh Arrey pointed out that the SOBA UK Residential Convention was important enough to travel hundreds, or thousands, of miles to attend. “The gala night hall was filled to overflowing,” observed Dr Enow Humphrey.”

Next year, the SOBA UK show promises to be an even bigger success. Many are hoping that the convention center will again be one of the best in the United Kingdom, and there are plenty of luxury hotels with some of the best dining available.

It is vital to include in this report that the executive chairman and editor-in-chief of the Cameroon Concord News Group, the Right Honorable Soter Tarh Agbaw-Ebai was a guest of honour at the convention. SOBA UK has already begun planning to make next year’s residential convention better than ever.