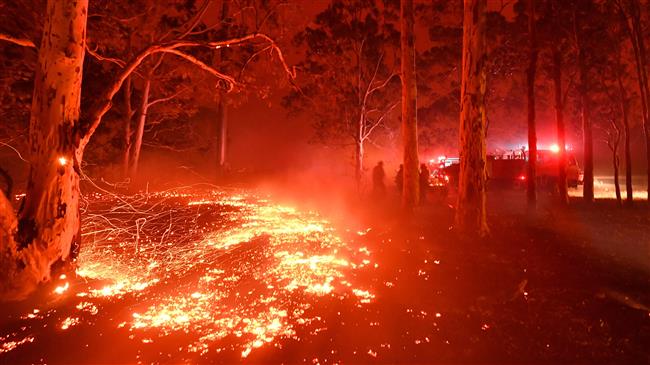 Four thousand people have been trapped on a beach in southeast Australia after being forced to flee their homes as huge fires encircled swathes of territory and left no escape route by land.

The figure included tourists and locals who had sought refuge on the foreshore of the Australian town of Mallacoota, in the state of Victoria, on Tuesday as wildfires raged across the region.

Smoke in Mallacoota was reported to have turned day to night, with local authorities saying nearby fires were causing extreme thunderstorms and “ember attacks.”

Early in the morning, town officials had ordered the activation of emergency sirens to warn of the imminent fire threat, which prompted residents to rush to the seaside following an evacuation plan previously outlined in community meetings.

But the plan was to merely shelter people at the beach.

“We’ve got three strike teams in Mallacoota that will be looking after 4,000 people down on the beach there,” said Andrew Crisp, Victoria’s Emergency Management commissioner. “We’re naturally very concerned about communities that have become isolated.”

Large numbers of residents and visitors, enjoying summer holidays, were also forced to seek refuge in towns up and down a 200-kilometer strip of coast in southeast Australia, with some taking to the sea with boats in the hope of surviving from the country’s months-long bushfire crisis.

Australian media reports said dozens of properties had been destroyed since late Monday and at least seven people were missing in New South Wales (NSW) and Victoria states.

“In some places the flames were so intense, the smoke so thick, and the fire-provoked dry lightning storms so severe that aerial reconnaissance and waterbombing had to be halted,” the Rural Fire Service in NSW was quoted as saying by AFP.

More than 900 homes have been destroyed in NSW alone, and the number will likely increase as firefighters struggle to contain the massive fires.

Australia’s bushfires have been burning for months, destroying more than 10 million acres and killing nine people since October, including three volunteer firefighters.

The crisis has also impacted the major cities of Sydney and Melbourne, home to several million people.

Bushfires are common in Australia’s hot, dry summers, but the ferocity and early arrival of the fires in the southern hemisphere this year is unprecedented, with experts saying climate change has left bushland tinder-dry.