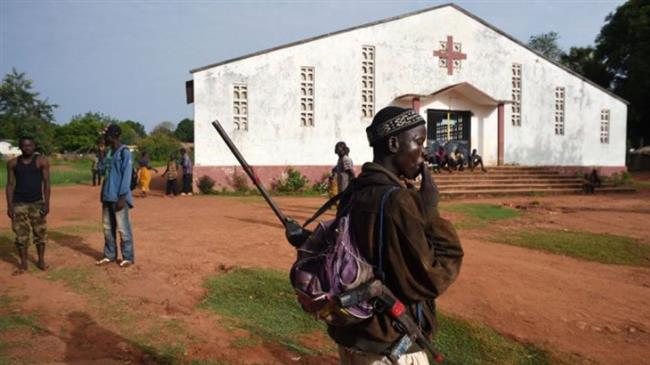 9 die in attack on church in Central African Republic 0

At least nine people, including a priest, have been killed in an attack on a church in Bangui, the capital of the Central African Republic.

Pastor Moses Aliou said on Tuesday that dozens had also been wounded in the attack, which was carried out during the morning service in the Notre Dame de Fatima church.

Witnesses said assailants attacked the church, shooting and using grenades. The church-goers were trapped inside the compound. Police later opened a hole in a wall of the church building to allow people to escape, witnesses said.

“Filled with panic, some Christians began to flee until bullets and grenades begin to fall in the parish grounds, trapping those who remained in the compound,” said Aliou.

The wounded were taken to Bangui’s Community Hospital but it was not clear how many people died in the hospital and how many in the church attack itself.

Chancellor of the Archdiocese of Bangui Walter Brad Mazangue said the priest killed in the attack died as a result of shooting in the church. The priest was identified as Albert Toungoumale Baba. Thousands of Christians gathered near the church to protest the attack when Baba’s body was being carried to the presidential palace.

The attack came near the site of clashes between United Nations peacekeepers and security forces of the Central African Republic on one side and criminal gangs on the other in the PK 5 neighborhood. A total of 21 people were killed during the fighting which came after UN and local forces tried to disarm the gangs.

The Central African Republic has experienced rounds of inter-faith violence in the past, especially in 2013 when “anti-balaka” Christian militants killed many from the Muslim Seleka after a Seleka uprising led to the ouster of President Francois Bozize.