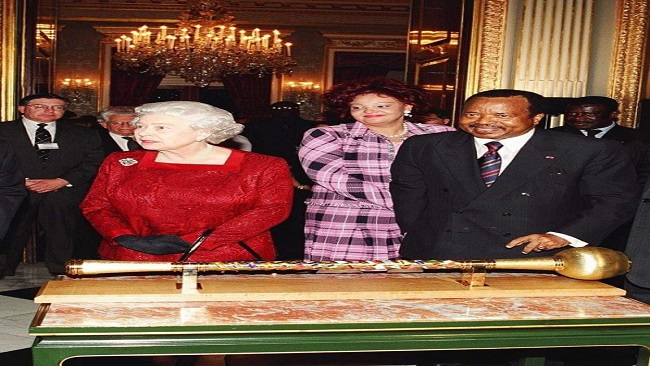 “The death of Her Majesty Elizabeth II is felt painfully and affects the Commonwealth of Nations. She had a unique stature and played an emblematic role throughout history,” tweeted Biya, who now becomes the world’s oldest sitting head of state.

The 89-year-old autocrat has been at the helm of central Africa’s largest economy for 40 years and counting. If his prior seven years as prime minister are added to his four-decade reign, Biya would be the world’s longest-ruling non-royal leader.

Biya is followed in age by Michel Naim Aoun, the 88-year-old former military general who has served as president of Lebanon since October 2016.

Under Biya, Cameroon survived an economic downturn in the mid-1980s to the early 2000s and moved from a one-party to a multiparty state.

The Lion Man, as the octogenarian leader is fondly referred to by members of his ruling Cameroon People’s Democratic Movement (CPDM) party and his admirers, reluctantly accepted multiparty politics in the 90s, though he has remained a serial election winner, with opposition parties describing all the votes as routinely rigged in his favour.

Cameroon has had only two heads of state since its independence from France in 1960 and Biya is the only president most of the nearly 28 million Cameroonians (World Population Review) have ever known. He inherited a country of less than 10 million people when he was sworn in for the first time in 1982, succeeding the country’s first president, Ahmadou Ahidjo. Cameroon has a largely youth population, with more than 60 per cent of the populace under the age of 25.

Biya raised hope when he ascended to the helm but his tenure has been mired in controversies, with the leader coming under heavy criticism for authoritarian rule and endemic corruption in a country where an average citizen lives on less than $2 a day.

Cameroon had been rated as ‘the most corrupt country in the world’ by Transparency International, which ranked the country as the top most corrupt nation in the world successively in 1998 and 1999.

Biya has also become notorious as an absentee president ruling from abroad, lavishly spending taxpayers’ money in luxurious hotels in Switzerland, which is described as the second home of the permanently holidaying leader. He regularly swings off to the Alpine country for some rest at the Intercontinental Hotel in Geneva.

A 2018 investigation by the Organised Crime and Corruption Reporting Project (OCCRP) estimated that Biya spent nearly 60 days on private visits out of the country the previous year and that he spent a third of the year abroad in 2006 and 2009.

The report, described by Biya’s supporters as “propaganda”, said the leader had spent $182 million on his private travel since becoming president. It said Biya spent $40,000 a day for hotel accommodation for himself and his entourage.

Biya would have been ineligible to run and eventually be elected for a sixth term in 2011 if the ruling party-dominated parliament had not voted three years earlier to amend the constitution, removing presidential term limits. The tinkering of the constitution gave Biya the leverage to stay in power indefinitely.

Cameroon had largely been relatively peaceful under Biya until an insurgency by Nigerian-based Boko Haram spilled over into the country since 2013. Three years later, what could be his biggest challenge – an industrial strike by lawyers and teachers in the English-speaking part of the country – started. It morphed into a separatist conflict crackdown on protesters.

Separatist groups sprouted and increased demands for independence of the two regions, giving birth to armed groups that have been battling government troops since. The violence has caused about 6,000 deaths and a major humanitarian crisis, with almost 600,000 people internally displaced in the Anglophone and neighbouring regions, and over 77,000 forced to become refugees in Nigeria, according to humanitarian organisations.

Biya, who rarely speaks to the media, left it up in the air whether he will seek reelection or retire at the end of his current mandate when he told a French journalist in July that he still has three years left for his current seven-year term to expire.

“Wait until the end of the mandate to know whether I will stay or go back to the village,” Biya said at a joint press conference with visiting French President Emmanuel Macron in Yaoundé.

Culled from The Citizen