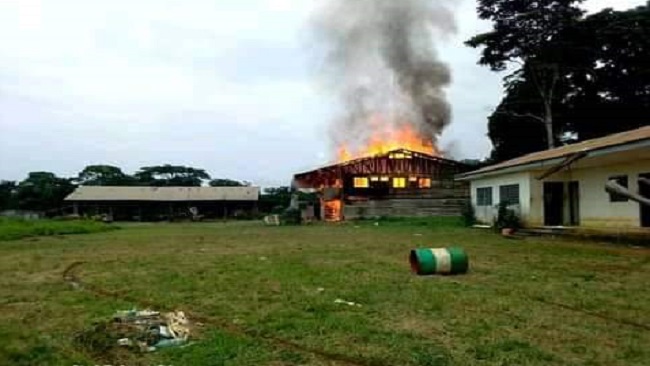 The Ambazonian fighters, who attacked the centre, were led by a special team directed by the Manyu Liberation Council who hinted our correspondent in Mamfe that the Ossing timber centre was raided to enforce the Southern Cameroons Interim Government policy on zero logging of wood by corrupt Francophone operators.

Reacting to the Ossing raid, Vice President Dabney Yerima told Cameroon Concord News that “Logging of wood is banned in the entire Southern Cameroons and there is a law to that effect which was made public by President Sisiku Ayuk Tabe four years ago.”

Dabney Yerima pointed out that French Cameroun timber merchants stationed in Manyu were supposed to have consulted with the Manyu Chiefs Conference immediately after the declaration of Southern Cameroons independence by President Sisiku Ayuk Tabe and work in collaboration with Southern Cameroons anti-deforestation task force.

The exiled Southern Cameroons leader said the Manyu Liberation Council has the responsibility to appoint a body within the Eyumojock Chief Conference and the council to run the Ossing timber centre in the best interest of the Ejagham people. Yerima also stressed that Amba fighters will follow the French Cameroun timber merchants to the jungle and the forests where they do the logging and if they escape Ambazonia dragnet, the fighters will confiscate the illegal wood.