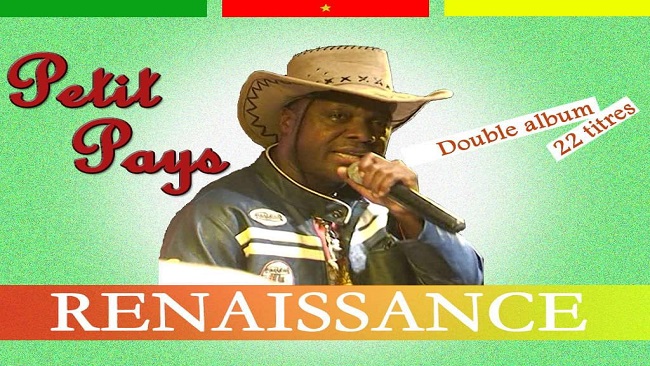 An attempt to define the undefinable: Petit Pays the phenomenon 0

An attempt to define Petit Pays is an attempt to define, the indefinable. The Greeks once defined man as something between a fool and God- this definition could probably be the peck into which Petit Pays could comfortably fit into, for simple reasons. But if we were to add flesh to this skeleton of a definition, I will start by saying that, the status of an artist has proven itself incapable of holding bound the vertiginous spirit of this man.

Here is a man who for more than 30 years has evolved himself into the most significant and un-avoidable cultural phenomenon in Cameroon. There is arguably no other individual in the history of this country who has sketched, defined, defied, influenced and shaped popular or public opinion. Void of fear, he has gone on to put on the table of public debate, the most inflammatory topics, as per African society-with issues like, homosexuality, sex positions and the eventual death of African Presidents. To name a few

Being the epicenter of contradictions that he is, Petit Pays has proven himself capable of articulating in sound and text, the transcendental dimension of Love a la Eros in tracks like “Ne me Quitte pas”. And on the other hand, has made evident his ability to excel in the profane-by making edible the breast of a woman in a song Like ‘’Bobee’’.  Again he is credited with “Loba” one of the most favorite gospel and soul-searching songs in Cameroon; but on the other side of the coin he has gained alarming value in controversial currency for his song “Pede”; which is nothing else but a comic recognition and description of homosexuality in Cameroon. He is continuously seen putting on the griot’s attire for men in power-then will again come up with S.O.S songs decrying the deplorable living conditions of the citizens under their governance. “Refusing to kill the child” in him like every other genius, he is seen on his album covers playing with his sex (Maestro, 2002), dressed like a woman (La Monaco, 2005), and with virtually no quantum of shame

Posing naked (Class F and Class M, 1996), making his entrance into concerts in a coffin, dubbing himself with a multitude of titles and names ranging from Effata to Raba Rabbi or from turbo to omega. As he describes himself, “It seems like I have the genius to shock.” For sure there is no doubt, which the ability to perennially reconstruct one’s image and to surprise the audience is the mark of every true artist.

He remains one of the few Makossa artists continually redefining the genre. For example, by collaborating with the Cape Verdean musical director, Manu Lima, in the early 90’s he created a sub-genre today called Makossa-Love; characterized by the ubiquitous presence of the clavier and its sentimental effect; immensely influenced by the afro-zouk groove popularly played in Lusophone Africa. He as well injected pop and rock colors into Makossa by crowning the presence of the drums in his compositions. To create what can be defined as Makossa-pop; characterized by quick-exciting drum movements.

As a groundbreaker, he made his entrance into the musical scene with two instant hit albums; “ca fait mal” in 1987 and “Ancien Parigo” in 1988 till date considered by most critics as a masterpiece. He holds till date the speed record for album sales in Cameroon after selling in a week 50000 cassettes of his double album “Class F and Class M’’in 1996.

Using the autobiographical elements of his former marriage to a French woman, popularly known as Maria, Petit Pays composed songs and introduced a mythic character into the love mythology of the Cameroonian society called Maria. A character defined by her elusiveness and the sensuality of all her parts.  And overtime Maria has gained grown as a mythic character in the country, virtually everybody has heard about her, but on the other hand, almost nobody can recognize her without the introduction of her former husband (Adolphe Claude Moundi)

Considered by some as an incarnation of the devil and by others as an incarnation of God the father love or hate him, it is impossible to be insensitive or indifferent in Cameroon and in Africa at large at the mention of the name Petit Pays. And once indifference seizes to be presented as a reaction to a man or objects, then we are sure to be witnesses of something great; irrespective of how one may like to define the word “great.”

And am sure my Cameroonian counterparts would agree with me that, there is no way to escape, forget and ignore a man in this country who stands up to say “a Etoudi et a Mvomeka C’est Nioxx.” Finally, In his new album coming this summer, titled ” Renaissance” Petit pays brings a cultural rebirth of his musical career with themes from the 80s through the 90s, based on the reawakening of  Makossa love the strengthens till today.