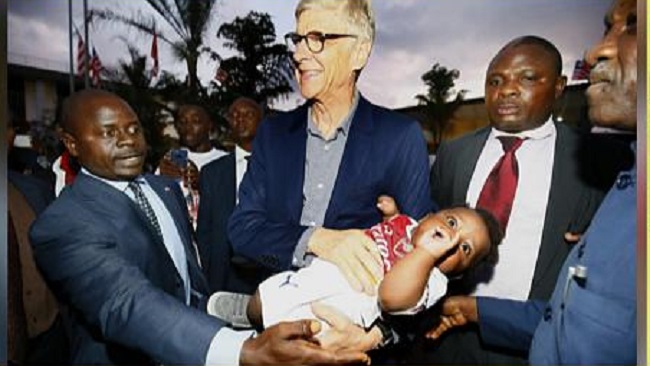 Arsene Wenger in Liberia, says he’s not aware of any honor 0

Arsene Wenger arrived in Liberia on Wednesday evening, with the ex-Arsenal boss set to be handed the country’s highest honour from president George Weah.

Wenger, who ended his 22-year association with the Gunners in May, will be inducted into Liberia’s Order of Distinction.

But in the wake of those reports that President George Weah is to award his former football coach with Liberia’s highest honor, the former Arsenal coach has out-rightly denied having knowledge of receiving any honor in the country.

He said: “I am not aware of any honor. I just came here to visit, because I promised George that one day, I will visit Liberia, and in return, I do not expect anything like award or honor. I am happy to be here.”

This also comes after Liberians expressed mixed reactions about the purported honor, in which the award ceremony is reportedly supposed to take place in the country’s capital, Monrovia, on Friday.

It was Arsene Wenger who took Weah to Europe, signing him for Monaco in 1988.