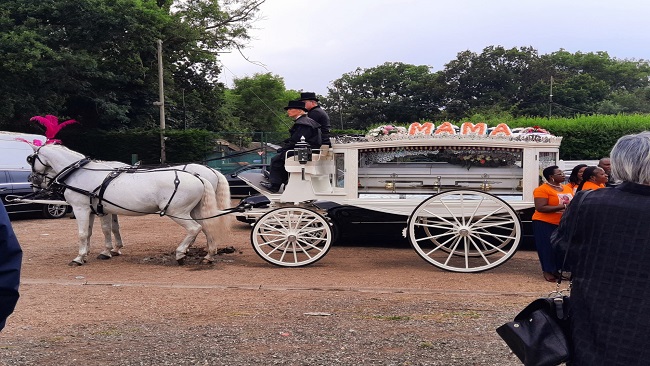 As it happened: Mama Mercy Bessem Tataw laid to rest in Hendon Cemetery 0

Nearly everything about the funeral was not familiar with the Cameroonian community in the UK. It was not about first Holy Communion or christenings or a wedding. It was a funeral. But this time around for a Manyu Princess-Mama Bessem Tataw!

During Saturday’s funeral service for Mama Mercy Bessem Tataw, her daughter Vivian Mambo remained steadfast as ever supported by her husband Charles Mambo both of whom were socially distanced from the sparse Cameroonian congregation.

Until Saturday 24 July 2021, Cameroonian funerals in the UK were simply to move around with a begging bowl. Correspondingly, the long months of the Covid-19 crisis have made virtual send-offs horribly commonplace. Funerals were all moved to Zoom and Facebook. But this was not the case of Saturday’s event attended by a sell-out crowd including ex-students of Saker Baptist College.

Watching the progress of Mama Mercy Tataw’s coffin, the fact is that there was everything: consolations of hugs and belted-out hymns, a scrum of shoulders to weep on and old faces to recognize.

As it happened: Mama Mercy Bessem Tataw laid to rest in Hendon Cemetery

The United Kingdom Sakerrettes alumni group acting as ambassadors and trusted advocates for Saker Baptist College receiving the horse-drawn hearse that grazed the streets of Mill Hill, London befitting of Royalty. And inside the white casket drawn by white horses to the land of Manyu ancestors laid a Queen-Mama Mercy Bessem Tataw

Mrs. Vivian Mambo and Charles Mambo led the Cameroonian community in one minute of silence in memory of late Mama Mercy Bessem Tataw before her funeral and burial at Hendon Cemetery.