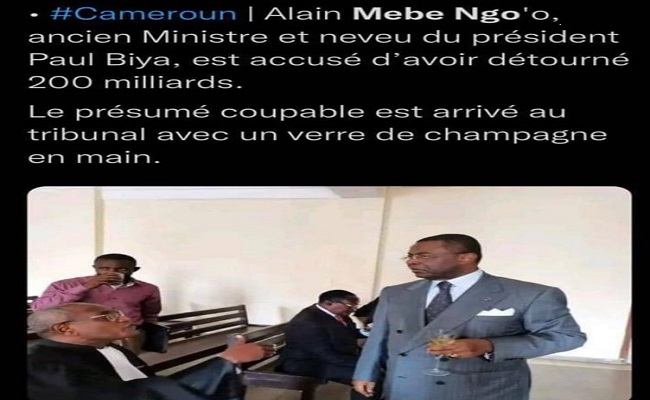 At a time of political darkness in Cameroon: It’s time for Southern Cameroonians to leave 0

You may have heard of the Edgar Alain Mebe Ngo’o scandal, in which at least three prominent Francophone figures were also arrested! To be sure, a deputy director of a bank, a Treasury inspector and an army colonel were all detained alongside the man once tipped to succeed President Biya and charged with diverting public funds and corruption.

When that sprawling con burst into public view, it was easily the biggest financial scandal that ever rocked the ruling CPDM government and only compared to the Albatross Affair. That was bad enough, but today the disgraced former Minister of Defense, Edgar Alain Mebe Ngo’o appears in court holding a glass of very chilled champagne (See photo attached to this report).

The Francophone political players may be a little different, but the Anglophone basic premise is correct: Reunification was a rigged game. We found this out in the last five years, when Francophone army soldiers were deployed to slaughter innocent Southern Cameroonians while series of related corruption stories spilled out of nearly every government sector in Yaoundé including SONARA, the National Oil Refinery Company. The recent financial scandal facing the National Hydrocarbons Corporation (SNH) is a justification that corruption in Biya’s Cameroon is just about everything.

Journalist Jules Koum Koum, who died in a Cameroon government road accident plot, had in 2010 investigated an alleged over-billing scandal for military uniforms at the defense ministry when Mebe Ngo’o was minister.

A fifth person questioned in the same investigation is nowhere to be found! They are all blood relations to the Head of State President Biya.

It is no surprise to Southern Cameroonians that the Special Criminal Court which deals with major corruption cases now allows criminals to attend hearings with champagne making the legal process a manipulation-on-manipulation situation.

What is happening in French Cameroun is the height of criminality. It’s time for Southern Cameroons to leave.

The Mebe Ngo’o bad news didn’t start at the ministry of defense! Before joining the government, he had led the police force and run the presidency’s civil office. But the biggest shock came out of the defense ministry where he spent six years and also in the ministry of transport.

Biya and his Francophone political elites have made Southern Cameroonians to be living in an era of undisguised, French Cameroun conspiracy, in which the only solution for the people of Southern Cameroons is to get back to Buea and begin all over again.