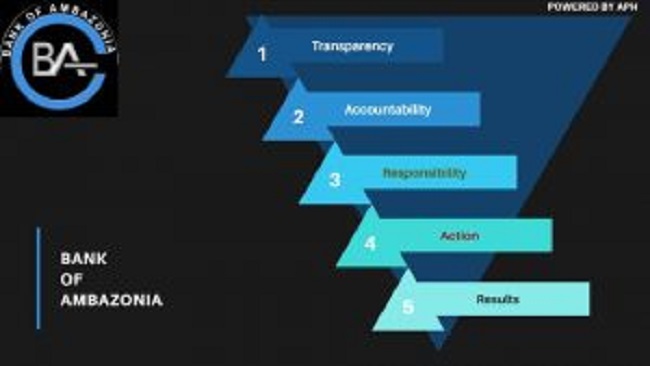 The Bank of Ambazonia (BoA), the central bank for the Federal Republic of Ambazonia, today announced that it has constituted its Board of Governors and would soon begin financing strategic projects for the security and welfare of the Ambazonian people. The BoA is an all-inclusive, semi-autonomous informal financial structure, with credible representatives from the 13 Ambazonian counties and other constituent components of the Ambazonian revolution.

“The response to the launch of the Ambazonia Freedom Bonds has been quite enthusiastic and the Board has just created a project committee, which will begin scrutinizing strategic projects for financing,” said Dr. Asa’na Akoh, Chair of the Board of Governors. “We are very pleased with the composition and quality of our Board members; who not only have financial, legal, management, communication and other technical skills; but above all, are completely dedicated to the liberation of our country.”

The Federal Government of Ambazonia (FGA) Treasury Bonds, popularly known as the “Ambazonia Freedom Bonds,” are fixed-interest rate public debt-based investments. Money is loaned to the Interim government by individuals or institutions in return for an agreed interest rate of twenty percent (20%). This debt security provides an investment avenue for Ambazonians and other willing investors to invest in the future of our nation. The minimum investment is two hundred fifty dollars ($250.00) and having a maturity of five years after independence. The bond will be payable in US dollars by the Treasury of the Federal Republic of Ambazonia to bond holders.

The Bank of Ambazonia has floated three types of bonds – Defense, Humanitarian, and Diplomatic bonds. Each of these bonds costs $250.00 and yields the same dividends; but gives the investor the opportunity to finance any aspect of the Ambazonian revolution.

“We are appealing to all Ambazonians and other people of good will to help us finance this new nation by investing in one of our bonds,” said Chairman Akoh. “This is an excellent opportunity to do good while earning a return on your investment. The FGA has the obligation to pay the bondholder the principal and agreed interest at bond maturity. When you buy the Ambazonia Freedom Bonds, you are lending to the FGA for a specified period of time. These bonds are backed by the ‘full faith and credit’ of the Federal Government, and resources of the nation and people of Ambazonia.”

About the Bank of Ambazonia (BoA): The Bank of Ambazonia (BoA) is the central bank of the Federal Republic of Ambazonia. When fully constituted and empowered, it will serve as the nation’s reserve bank or monetary authority with responsibility for managing the currency, money supply, interest rates, and the commercial banking system. In its current iteration, it is an informal financial structure, not under the purview of any licensing authority.

About the Federal Republic Ambazonia: The Federal Republic of Ambazonia, is a nation in the process of decolonization. The territory, which was previously referred to as the British Southern Cameroons, was supposed to have gained independence from Britain on October 1, 1961; but was effectively annexed by La Republique du Cameroun on the same day. After nearly six decades of colonialism, the territory declared its independence on October 1, 2017, as the Federal Republic of Ambazonia. Upon the declaration, Cameroun began the massacre of thousands of unarmed civilians. Ambazonians now comprise the largest refugee population in Africa. Help us stop the Genocide in Ambazonia!