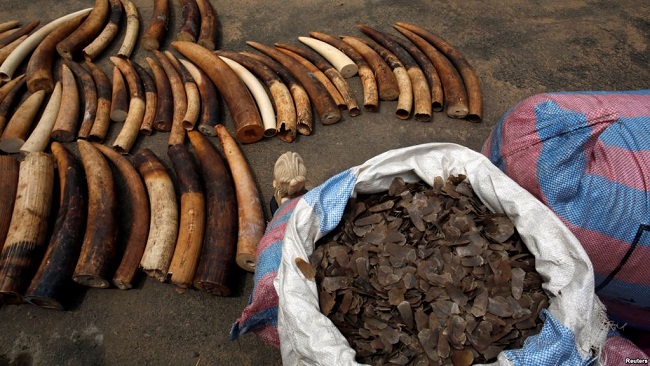 Law enforcement officials in Cameroon say investigations continue following a large discovery of illegal wildlife products hidden in shipping containers bound for China. At least 1,000 kilograms of pangolin scales and several hundred elephant tusks were found April 6, in containers of cocoa that were to be transported to China from the Douala international airport.

Officials have not yet determined the country of origin for the contraband. Poaching of elephants and pangolins remains a problem in Cameroon; however, the country has also served as a regional hub for smugglers. Didier Ngono, an official from the wildlife department, told VOA that three Chinese nationals have been arrested and will help police with their investigation.

Ngono says that under the law, the penalties for smuggling include fines ranging from $6,000 to $20,000 and prison sentences of between one and three years.

“In 2016, two Chinese traffickers were arrested with five tons of pangolin scales that were about to be illegally exported from the country to China,” Tah said. “They were given three months’ imprisonment from … the one-year minimum imprisonment they were supposed to get, and this is why we are very dissatisfied. They should be given punishment that is commensurate to their crimes.”

Both pangolins and elephants are considered critically endangered. International trade in pangolin and ivory is banned, yet consumer demand remains high in Asian countries, fueling the illegal market. Pangolin meat is considered a delicacy and the scales are used in traditional medicine.