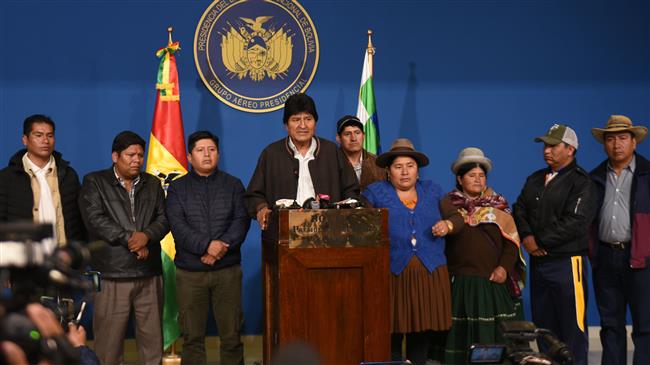 Bolivian President Evo Morales announced his resignation Sunday, caving in following three weeks of sometimes-violent protests over his disputed re-election after the army and police withdrew their backing.

“I resign my post as president,” the leftist Morales said in a televised address, capping a day of fast-moving events in which several ministers and senior officials quit as support for Latin America’s longest-serving president crumbled.

The streets of La Paz immediately exploded in celebration, as jubilant Bolivians set off firecrackers and waved the country’s red, yellow and green flag.

Morales, 60 and in power since 2006, was declared the winner of the October 20 presidential election a narrow margin, giving him a controversial fourth term.

But the opposition said there was fraud in the vote count and three weeks of street protests ensued, during which three people died and hundreds were injured.

The Organization of American States carried out an audit of the election and on Sunday reported irregularities in just about every aspect that it examined: the technology used, the chain of custody of ballots, the integrity of the count, and statistical projections.

As chanting Bolivians kept up demonstrations in the street, Morales called new elections, but this was apparently not enough to calm the uproar, and the commanders of the armed forces and the police joined the calls for the president’s resignation.

Violence continued Sunday as a caravan of buses taking opposition supporters to La Paz was attacked, leaving three people injured, including one by gunfire.

To make the announcement that he was stepping down, Morales traveled by plane to the coca-growing Chimore region of central Bolivia, the cradle of his career in politics.

It was there in the 1980s that Bolivia’s first indigenous president made his name as a combative union leader defending farmers who grow coca, which in the Bolivian countryside is used for medicinal and other purposes. It is also the raw material for making cocaine.
He was accompanied by vice president Alvaro Garcia Linera, who also resigned.

On social media, Bolivians speculated that Morales might leave the country, perhaps going to Argentina, which just elected a center-left government.