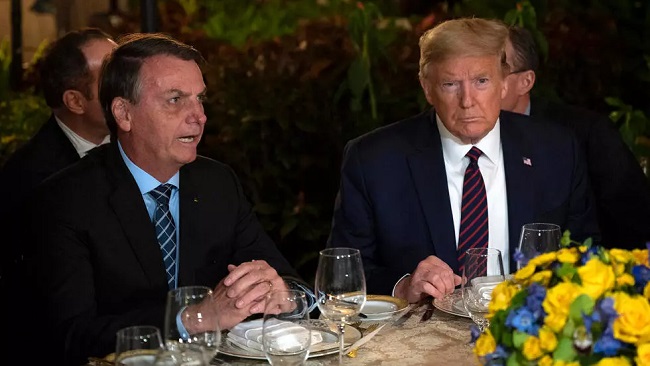 Fabio Wajngarten, chief spokesman for the Brazilian government, traveled with Bolsonaro last Saturday to Tuesday to the United States, where the far-right leader — who has been dubbed a “Tropical Trump” — met with his US counterpart.

Wajngarten, who posted a picture to his Instagram account that shows him side-by-side with Trump, developed flu-like symptoms and tested positive for the virus that has become a global pandemic, the Brazilian presidency said in a statement.

Trump said he was unconcerned and downplayed his contact with “the press aide,” apparently referring to Wajngarten.

“I did hear something about that. We had dinner together in Florida, in Mar-a-Lago, with the entire delegation. I don’t know if the press aide was there. If he was there, he was there. But we did nothing very unusual,” he said.

“Let me put it this way, I’m not concerned,” he said, speaking a day after announcing a shock 30-day ban on travel from mainland Europe because of the pandemic.

Brazilian media reports said Bolsonaro had also been tested for the virus.

Newspaper O Globo reported that the US embassy in Brasilia had contacted the Brazilian government for information on Wajngarten’s test.

The embassy did not immediately respond to a request for comment from AFP.

The Brazilian president’s office “has taken and is taking all necessary preventive measures to protect the health of the president and all staff that traveled with him to the United States,” it said in a statement.

“This is because one of the officials in the group, Presidential Communications Secretary Fabio Wajngarten, is infected with the new coronavirus, COVID-19, as confirmed by a second test that was recently carried out.”

Bolsonaro, an admirer of Trump, met the US president at a lunch on Saturday.

After the meeting, Wajngarten posted a picture of himself standing next to Trump and wearing a hat reading “Make Brazil Great Again.”

In the picture, Trump, who is holding a similar hat, is standing next to Vice President Mike Pence.