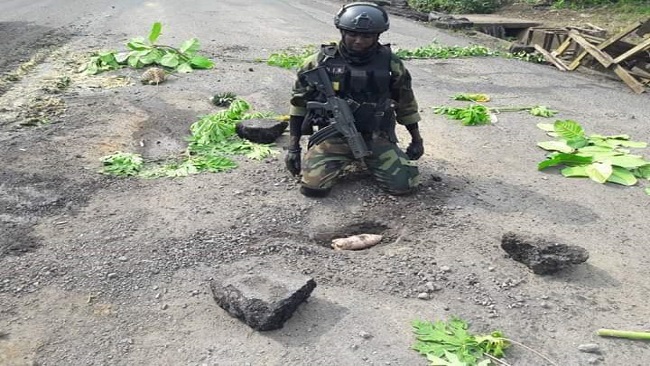 Our chief intelligence officer in the Northern Zone of Southern Cameroons has hinted that there are numerous mines laid everywhere on the way to Bali and towards Wum.  A Francophone soldier was reportedly killed as he attempted planting a mine in Mfuni in Manyu.

Recently, four Ambazonian women were killed after stepping on a mine planted on the highway towards Batibo. Ambazonian commanders say Cameroon government soldiers have planted several anti-personnel mines in several Southern Cameroons districts in the last three months.

Engaged in long battles with Ambazonian Restoration Forces, the French Cameroun army has turned to landmines to block entry to areas where they operate. A Cameroon government army spokesperson in Bamenda, the chief city of the Northern Zone who confirmed the planting of new mines by Cameroon government army soldiers, said “Mines are only intended to cause harm to the Ambazonian fighters.”

The Southern Cameroons Interim Government through the Ambazonia Defense Council said in a statement that mines only kill or injure civilians – children, women and non-combatants. The Francophone dominated government in Yaounde import landmines and other weapons from European countries particularly France.

The Ambazonian Interim Government has identified the need for a public awareness campaign to inform people, particularly children, about the risks of mines planted by Francophone soldiers.