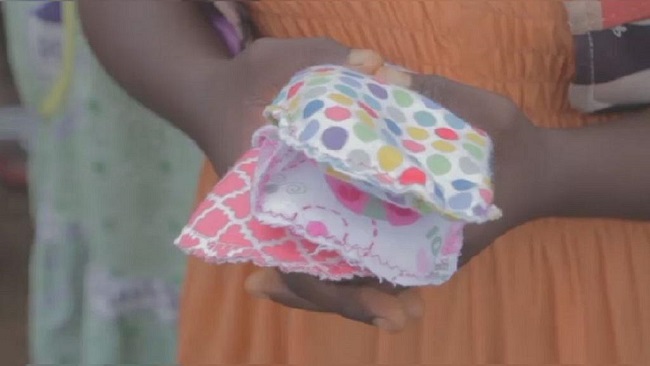 After realizing that girls often skipped school every month because they couldn’t afford sanitary pads, Feka Parchibell is on a mission to make cheaper options available to students from disadvantaged communities in Cameroon.

Feka, a teacher, is the founder of Hope for Vulnerable and Orphans (HOVO) an organization that helps teach youth life skills and seeks to empower them through entrepreneurship, leadership and agriculture.

Feka learnt to make washable pads using fabric through her organization’s partners, Rose Academies that’s based in the United States.

We do not have the money to buy the fabrics so it is not easy. The need is really huge and then getting into some of these communities is not easy. It’s really-really risky and challenging because we have to use the motto bikes, use public transports. So it’s really not easy.

The pads made from cotton, flannel, fleece fabrics and towels also have a fastener.

Washable pads provide an affordable alternative for girls from low-income families compared to a pack of disposable sanitary pads which cost about 1 US dollar.

“Mothers don’t talk these things with children so in my days nobody told me about it. When it happened they just told me – okay, you are a woman and I was given a packet of pads and that was it. So when it got finished I had to use other things. I had to go to use toilet tissue and so it wasn’t really easy. So because I know, I have been through that experience I was really really motivated to help some of these young girls out,” said Feka.

One in 10 African girls miss school during their periods, the U.N. children’s agency UNICEFestimates, which means they fall behind in their studies and often drop out of school.

Talking about menstruation is still considered taboo in many parts of the world where it is seen as shameful or embarrassing.

Feka and her team want to encourage people to talk openly about menstruation to girls on the continent.
Once a month Feka and her colleagues go out to local communities to teach girls and women how to make and use the sanitary pads.

The washable pads can be reused for six months, but this too can be a challenge if access to water and soap is limited.

Feka gets funding from the United State embassy in Cameroon and Rose Academies but she says the number of people relying on her for pads is far greater than what the resources can cover.

“The challenges are huge because we get to see some many people in need but the means is not there. We do not have the money to buy the fabrics so it is not easy. The need is really huge and then getting into some of these communities is not easy. It’s really-really risky and challenging because we have to use the motto bikes, use public transports. So it’s really not easy,” she said.

Sharon Eta, 15 is a beneficiary of the pads project and says when she started her period her mother could not afford to buy her sanitary towels. She says after attending one of Feka’s talks things improved and she’s also learnt how to make her own pads.

“When I got the pad from aunty Parch (Parchibell) the pad was helping me into some ways. That is from morning to evening I will not change no leakage. I can play, I can go out,” she said.

Campaigners say it is important to make pads more widely available as girls are often forced to stay at home during their periods, affecting their development and self-esteem.