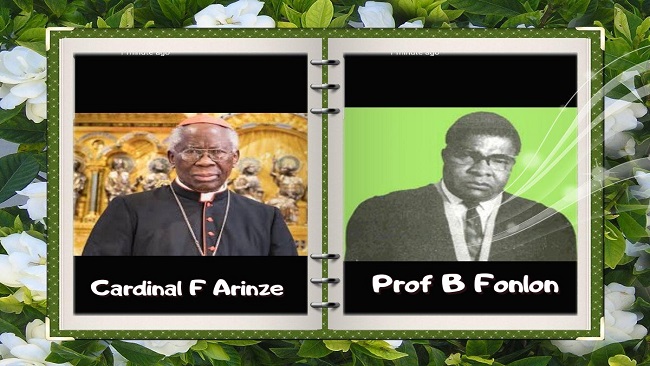 Cardinal Arinze says cause of beatification of Dr. Bernard Nsokika Fonlon could be introduced 0

I hold Dr. Bernard Nsokika FONLON in very high regard.

I first got to know him in Bigard Memorial Seminary, Enugu, Nigeria, in the years 1953 and 1954. He was in second year theology when I entered that Major Seminary in September 1953. When he and his classmates were due to be ordained subdeacons in December 1954, the Seminary authorities and his Bishop decided not to admit him to major orders.

As a seminarian, I saw Bernard as a learned seminarian. I still remember how with lustre he sang “Audi Benigne Conditor” during Vespers in Lent. He took no breakfast. When other seminarians were at breakfast, he was studying, we believed he was at Latin and Greek!

During holidays and in the years after he had to leave Bigard Memorial Seminary, he used to visit one of the Nigerian priests, Monsignor Peter Meze-Idigo who was very kind to him, as he also was to seminarians in general. Once during those visits by Fonlon to Monsignor Meze at Dunukofia, my parish, I took Bernard to visit my parents at Eziowelle and my father, a good wine tapper, gave him good palm wine which he took gladly. I still remember that my mother tried to converse with him in Igbo and was surprised that Fonlon did not know how to speak Igbo. I had to inform my innocent mother that Igbo is not the only language spoken in Africa!

I lost track of Fonlon in the years when he worked for a Doctorate in Ireland and another Doctorate in France. The next time I met him was during the Nigeria-Biafra war, probably in 1968 or 1969. It was a quick meeting because we were both passengers in Air France flying to Paris from Douala. At that time, Dr Fonlon was Minister of Communications in the Camerun and I was Archbishop of Onitsha.

After that Nigerian civil war, I visited Dr Fonlon in Yaounde. It may have been around the year 1972. I first visited Archbishop Paul Verdzekov in Bamenda. Then I flew from Buea to Yaounde. Fonlon met me at the airport. I stayed about two days with him. I then learned that he was no longer Minister in the Government because President Ahidjo called him and explained: Bernad, I regret that we can no longer retain you in the cabinet because you put the rest of us ministers to shame, because you are your own driver and you drive an old car.

My unforgettable memory of my stay with Fonlon in his flat was that one day his sister prepared a fou-fou lunch for both of us. During lunch, Dr. Fonlon was so absorbed in our conversation (which was more me listening to his wisdom) that I finished my lunch; he then put together his fork and knife, put his plate aside and continued his learned discourse. He forgot that he had not eaten anything yet! I have never in my life of 87 years reached that level of detachment from creatures.

Dr Bernard Nsokika Fonlon was a man of high ideals. He prayed. He said the Latin Breviary daily. He loved the Church. He was not bitter that he was not ordained a priest. In my view, it was an administrative mistake of his superiors that he was not ordained. It seems to me that they did not understand enough. He was the type of professional intellectual who may seem not the routine parish priest. As a university priest, he could have answered many needs of the Church. However, as a lay person, he also did much good. The Camerounians are the best placed to make a judgement on this. He lived a celibate life. When I visited him in 1972, I saw that he loved the Breviary.

In my view, the Cause of Beatification of Dr. Bernard Nsokika Fonlon could be introduced. I am happy to be writing these lines on his anniversary of his death.

May he rest in the peace of Christ.