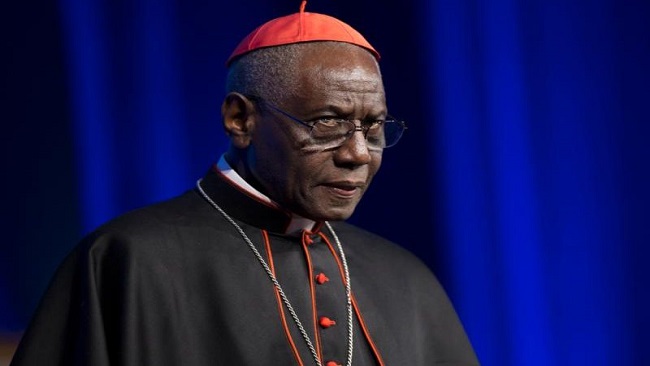 Cardinal Sarah has pointed out that high-ranking prelates are trying to change Christian morality. The cardinal also said the West was ‘committing suicide’ by losing its Christian faith

In a speech in Belgium, the cardinal accused high-ranking prelates from “opulent nations” of trying to modify Christian morality, and attacked pressure groups that “with powerful financial means and ties to the media, attack the natural purpose of marriage and commit themselves to destroying the family unit.”

Some high-ranking prelates, above all those coming from opulent nations, are working to cause modifications to Christian morality with regard to the absolute respect for life from conception until natural death, the question of the divorced and civilly remarried, and other problematic family situations. These ‘guardians of the faith’ however ought not to lose sight of the fact that the problem posed by the fragmentation of the ends of marriage is a problem of natural morality.

The great derivations became manifest when some prelates or Catholic intellectuals began to say or write ‘a green light for abortion,’ ‘a green light for euthanasia.’ Now, from the moment that Catholics abandon the teaching of Jesus and the Magisterium of the Church, they contribute to the destruction of the natural institution of marriage as well as the family and it is now the entire human family which finds itself fractured by this new betrayal on the part of priests.

During his visit to Belgium, Cardinal Sarah also gave an interview with Catholic media outlet Cathobel in which he repeated his criticism of fellow clergy.

“Faith has become lacking, not only on the level of the people of God but also among those responsible for the Church,” he said. “Sometimes we can ask ourselves if we really have faith.”

This lack of faith is also affecting the wider culture, he added:

“Not only is the West losing its soul, but it is committing suicide, because a tree without roots is condemned to death. I think that the West cannot renounce its roots, which created its culture and its values.”

The cardinal said “chilling things” were happening in the West, and Western nations were exporting those things to the developing world.

“I think that a parliament which authorizes the death of an innocent baby, without defence, is committing a grave act of violence against the human person.

“When abortion is imposed, especially on nations in the developing world, saying that if they do not accept it they will no longer receive aid, it is an act of violence. And it is no surprise.

“When God is abandoned, man is also abandoned; there is no longer a clear vision of who man is. This is a great anthropological crisis in the West. And it leads to people being treated like objects.”

Culled from the Catholic Herald