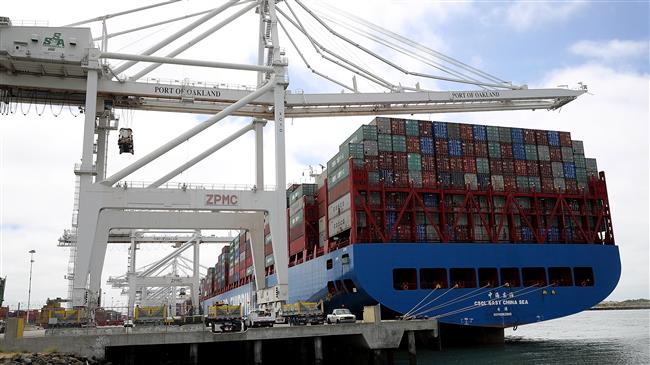 China says the United States is “opening fire” on the global economy and damaging the international supply chains by imposing tariffs on products from China and other countries, as controversial US duties on Chinese goods worth tens of billions are due to come into force at midnight Thursday.

“The US measures are essentially attacking global supply and value chains. To put it simply, the US is opening fire on the entire world, including itself,” said Gao Feng, a spokesman for the Chinese Ministry of Commerce, at a press conference in Beijing on Thursday, referring to the American practice of protectionism.

He said Beijing would continue to assess the impact of the current trade dispute with Washington and would help firms cope with possible shocks.

Last month, US President Donald Trump announced 25-percent tariffs on $50 billion in annual Chinese imports. He said he had also directed the US Trade Representative to identify $200 billion worth of imports for additional tariffs.

Trump also stressed at the time that his administration would be identifying another $200 billion in tariffs if China retaliated the new measures.

The total of $450 billion in goods represents the lion’s share of all of China’s exports to the US.

The US administration had originally proposed duties in April, starting with 1,333 Chinese products. After obtaining some public feedback, it omitted 515 imports from the blacklist but added 284 others.

Washington will impose duties on 818 Chinese products, worth $34 billion a year, from the original list, due to take effect on July 6. The Trump administration will not target the 284 other items — worth $16 billion — until it collects further public comments.

China, for its part, has vowed to retaliate with matching duties on US goods.

Beijing has said that Chinese tariffs on American products would come into force shortly after those of Washington do.

Trump is also involved in a similar trade tussle with Europe, Canada, Mexico, and South Korea.

China ‘will not fire the first shot’

If the US duties proceed to take effect on Friday as planned, Beijing will hit back with its own tariffs, initially on nearly $30 billion in US goods on the same day, China’s General Administration of Customs said in a statement on Thursday.

It added that China would not be the first to pull the trigger, however.

The Chinese tariffs include duties on vehicles and many agricultural and food products, such as soybeans, which will hit American farmers — normally part of Trump’s popular base — hard.

The remaining $15-billion Chinese tariffs would be imposed in the second phase and would target US crude oil, propane, and chemicals.

Elsewhere in his remarks, Gao also said that China’s foreign trade was expected to continue on an unwavering trail even though investors were afraid that a full-scale Sino-US trade conflict would deal a body blow to Chinese exports and its economy.

Back on June 14, Christine Lagarde, the head of the International Monetary Fund (IMF), warned that the trade war sparked by unilateral US import tariffs would have no winners and that the tit-for-tat cycle of retaliation would only create “losers on both sides.”

She also added at the time that the outcome of such a trade conflict would have a “serious” economic impact on the US and global economies, including by causing inflation to speed up.