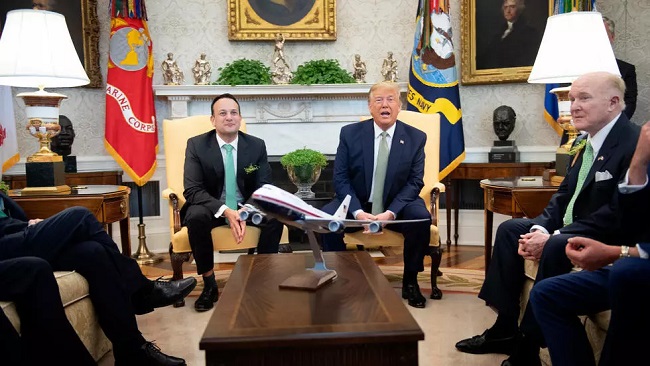 Coronavirus Outbreak: US President and Irish Prime Minister had a “strange” moment when it came to the traditional handshake 0

President Donald Trump and Ireland’s visiting prime minister, Leo Varadkhar, had a “strange” moment Thursday when it came to the traditional handshake.

“We looked at each other. We said ‘What are we going to do?'” Trump said to laughter in the Oval Office at the White House.

No one shakes hands more than politicians, but the age of coronavirus is forcing them to rethink.

“It’s a very strange feeling,” Trump said, describing the moment he greeted Varadkhar for the traditional annual visit of Ireland’s leader ahead of Saint Patrick’s Day.

Trump openly admits he is a germaphobe and never liked shaking hands anyway, but said “once you become a politician, shaking hands is very normal.”

He joked that on his recent visit to India he’d avoided exposure because of the country’s tradition of clasping hands as a greeting.

India and Japan, which has a tradition of bowing, are “ahead of the curve,” Trump said.

However, during the two-day trip to India Trump was frequently seen shaking hands and even hugging Prime Minister Narendra Modi.

Varadkhar said touchy feely politicians are just going to have to get used to it as long as the coronavirus pandemic continues.

“It feels impersonal, it feels like you’re being rude, but we just can’t afford to think like that for the next few weeks,” he said.