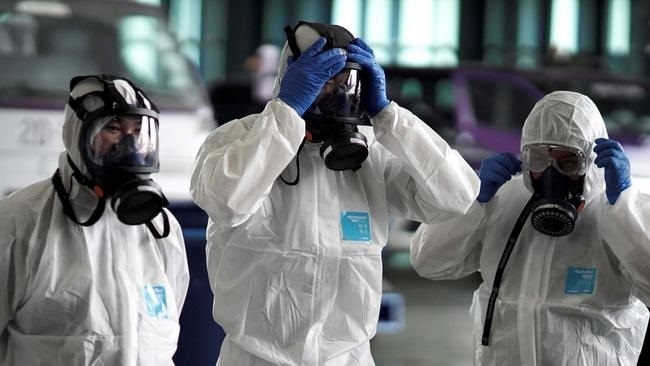 China suspended all football in the country Thursday, hours after the World Indoor Athletics Championships and World Cup skiing were postponed, adding to a long list of sports events hit by the coronavirus outbreak.

The world’s most populous country has become an increasing powerhouse in hosting international sport in recent years but has had its 2020 sporting calendar thrown into chaos.

Here, AFP Sport lists the events already affected and those potentially under threat:

— Football: China on Thursday suspended all domestic football and postponed indefinitely the top-flight Chinese Super League season kick-off due on February 22 in order to “carry out prevention and control of the pneumonia epidemic,” said the Chinese Football Association.

— Athletics: The World Indoor Championships, scheduled for Nanjing from March 13-15, were postponed for a year. “It is with regret that we have agreed with the organisers … to postpone the event to March 2021,” the sport’s governing body said in a statement Wednesday.

— Football: The Asian Football Confederation announced Wednesday that home Champions League group stage games featuring four Chinese clubs would be switched to away fixtures for the first three match days in February and March. A decision on venues for each club’s three home group matches will be made at a later date.

— Women’s football: A women’s Olympics qualifying event between China, Taiwan, Thailand and Australia scheduled from February 3-9 in Wuhan, the disease epicentre, was moved initially to Nanjing then to Sydney. The China women’s football team were quarantined in a Brisbane hotel on Wednesday after arriving in Australia for the tournament.

— Boxing: A qualification event for the 2020 Tokyo Olympics initially scheduled from February 3-14 in Wuhan was rescheduled for Amman in Jordan from March 3-11.

— Women’s basketball: Another Olympic qualifying tournament, a four-team battle for three Tokyo places between China, Great Britain, Spain and South Korea was moved on Monday from Foshan, in southern China, to Belgrade where it will run alongside another four-team group on February 6-9.

— Aquatics: The Chinese leg of the Diving World Series, scheduled for March 7-9 in Beijing, “has been cancelled,” Cornel Marculescu, president of the international swimming federation, told AFP on Monday. He said the World Series of synchronised swimming, scheduled for Suzhou from April 23-25, was also in question.

— Cycling: The Tour of Hainan, due to be promoted to the second-tier ProSeries this year, was scheduled from February 23 to March 1 on the southern island of Hainan. It has been cancelled “due to the health situation in the country”, the International Cycling Union said on Monday but could be rescheduled later in 2020.

— Formula One: The Chinese Grand Prix race weekend is scheduled for Shanghai from April 17-19, an event which attracts tens of thousands of fans.

“We are monitoring the situation in close collaboration with F1, the promoter and with the Federation of Automobile Sports in China, which is our conduit on the ground in China,” governing body FIA said in a statement.

“We are all monitoring it together. At this stage not much we can do except watch the situation and react if necessary, if recommendations are made by the relevant authorities.”

— Formula E: The electric car racing series is also due to stage a race in China, on March 21 on the southern island of Hainan.

A Formula E statement read: “Given the current health concerns, we are continuing to closely monitor the situation as it develops on a daily basis. We have requested that our regional partner works together with the local motorsport federation, to liaise with the relevant authorities in Hainan province to further analyse and assess the situation and provide recommendations on preparations for the race.”

— Football: China is due to host the Maldives in a World Cup qualifying match on March 26 and travel to Guam for another on March 31 and said despite the postponement of all domestic football any decision on international fixtures would be made at a later date.

“The CFA will continue to maintain close communication with national authorities, and decide each event’s timing separately based on the actual development of the epidemic situation in each locality,” a statement said.

— Wrestling: The Asian Olympic qualifying tournament scheduled for March 27-29 in Xi’an could be cancelled. “We are following the situation closely and we are in close contact with the Chinese federation and local authorities,” Nenad Lalovic, president of the International Wrestling Federation, told AFP on Monday. “We will take a decision within 15 days.”

— Sport conference: The SportAccord annual convention, which brings together the presidents of the major international sports federations and the heads of the Olympic movement, including IOC President Thomas Bach, is due to take place in Beijing from April 19-24.

SportAccord is “closely monitoring the situation” and “is following the recommendations of the Chinese authorities and the WHO concerning travel to and from China,” a spokesman told AFP on Monday.