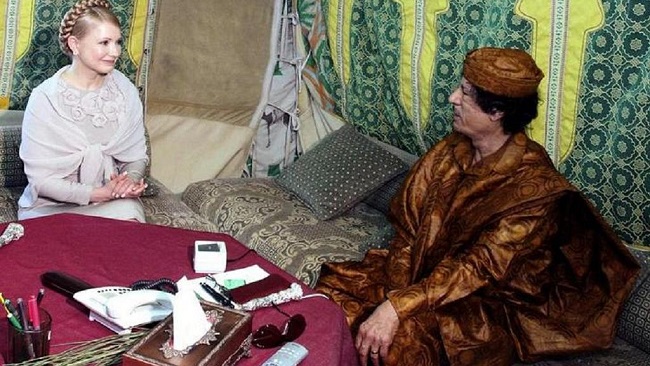 Tymoshenko denies the claims, but reports of past illicit campaign financing could damage the Ukrainian opposition leader, who is currently beating President Petro Poroshenko in opinion polls ahead of next year’s presidential vote.

Ariev, who is a member of Poroshenko’s ruling BPP faction, said he and other MPs had formally asked the National Anti-corruption Bureau of Ukraine (NABU) look into the allegations published by pan-Arab newspaper Asharq al-Awsat in February.

According to Asharq al-Awsat, a Gaddafi representative flew by private jet to Kiev to deliver a briefcase with 4 million euros ($4.9 million) in cash to help finance Tymoshenko’s ultimately unsuccessful 2010 presidential bid.

Under Ukrainian law, state bodies must investigate any claims if requested by members of parliament. No criminal case has been launched.

Asked to comment on the allegations, the press service of Tymoshenko’s Fatherland party said: “It is nonsense. The information is not correct.”

NABU did not immediately respond to a request for comment.

Tymoshenko has been prime minister twice and was imprisoned by former president Viktor Yanukovich in a case condemned by Western leaders as selective justice.

Known for her trademark braided hairstyle, Tymoshenko lost the 2014 presidential race, but the latest poll by Rating shows her ahead of Poroshenko with 18.7 percent support versus 15.6 percent for the incumbent president.

The next presidential election is slated for March 2019.

While Tymoshenko served as prime minister in 2007-2010, Kiev and Tripoli agreed a number of commercial deals including a plan for Libya to grow wheat on 100,000 hectares of Ukrainian land.

Gaddafi visited Kiev during a tour of ex-Soviet states in 2008, three years before he was overthrown and killed by rebels. He hosted Tymoshenko in a Bedouin-style tent that he had pitched in central Kiev as was his habit on official trips.