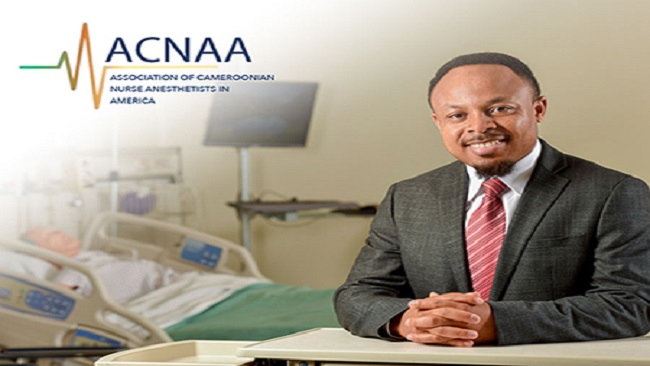 Dr. Aroke elected as president of the Association of Cameroonian Nurse Anesthetists in America 0

University of Alabama at Birmingham School of Nursing professor Edwin Aroke, Ph.D., has been elected president of the Association of Cameroonian Nurse Anesthetists in America and will serve a two-year term from 2021-2023.

As president, Aroke, along with other members of the ACNAA, will improve training for nurse anesthetists in Cameroon, develop workshops for education and create a sustainable revenue source to support ACNAA’s efforts. He will continue to donate lightly used equipment when possible and plans to complete a robust benchmarking study of the state of anesthesia care in Cameroon.

“As individuals who still have family in Cameroon and who have lived there, we bring more than expert knowledge to the table,” Aroke said. “It makes a difference to have providers who really understand the politics of the area and the culture and challenges of the people. Being able to relate to each other matters.”

Aroke is an award-winning educator, CRNA and researcher for pain disparities among minorities in the United States. He was recently named the John F. Garde Researcher of the Year by the American Association of Nurse Anesthetists Foundation. He hopes to use his knowledge and research during his ACNAA appointment to positively impact people’s lives in the United States and internationally.

The tie to his home country is strong, Aroke says, and for members in ACNAA, there is a

passion for improving anesthesia care in Cameroon. The gap in health care provider knowledge is a major issue and can lead to increased death rates for conditions that are easily treatable in the United States.

“Most of us entered nurse anesthesia to make a difference,” he said. “You get tired of hearing that someone had a hernia or appendicitis, went to the hospital, and died. If we come together and share our ideas and experience, we can be part of the solution instead of just sitting on the sidelines and criticizing.”