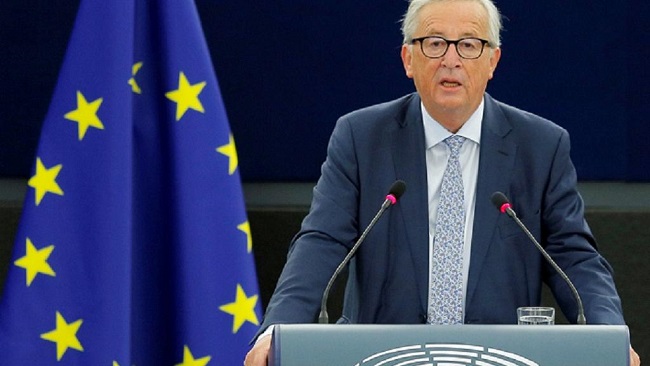 EU official warns ‘patience running out’ with UK over Brexit 0

European Commission President Jean-Claude Juncker has warned that the European Union (EU) is “running out” of patience with the United Kingdom over Brexit, days after a withdrawal deal put forward by embattled British Prime Minister Theresa May suffered a third defeat in the country’s parliament.

“With our British friends we have a lot of patience, but even patience is running out,” Juncker said in an interview with Italian public broadcaster RAI on Sunday. “So far, we know what the British parliament says no to, but we don’t know what it might say yes to.”

Juncker added that he would like the British parliament to reach an agreement on a Brexit plan “in the coming hours and days.”

Asked whether a second referendum on the matter within the UK might be possible, the European Commission president said it was an issue “that concerns the British only.”

People in Britain voted in a referendum in 2016 to leave the EU. But the British government remains divided on the manner of a withdrawal. Some have even questioned whether sentiments for a pullout remain as strong, suggesting that a second referendum be held.

The British premier had told parliament that the vote would be the last opportunity to ensure Brexit would take place, also warning that if the deal failed, any further delay to Brexit would probably be a long one beyond April 12.

The British parliament also rejected as many as eight Brexit options, including a no-deal Brexit and the revocation of Article 50, which would mean not leaving the EU at all.

Dissatisfied with the outcome of the deadlock, about a million people from both “Leave” and “Remain” campaigns took to the streets of London last weekend to push for a second Brexit referendum. European Council President Donald Tusk also called an emergency meeting for April 10.

The British parliament is scheduled to hold on Monday another round of “indicative votes” on potential Brexit options, one of which includes a customs union with the EU, an option May has always ruled out.

Britain is expected to ratify the Brexit deal until April 12 to secure a short extension from the EU to implement the withdrawal process. Otherwise, London will have to either leave the EU without a deal on that date or seek a long extension to come up with a new solution.