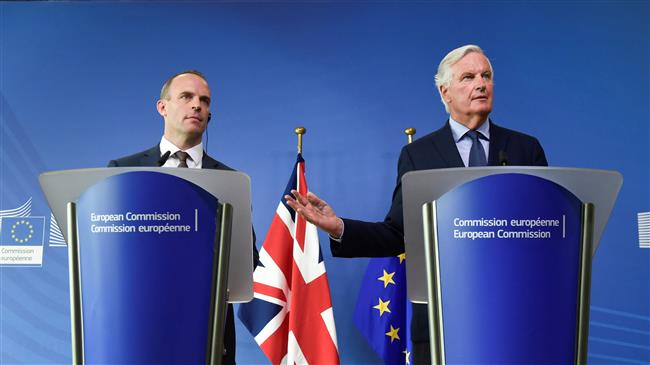 EU officially rules out deal on Brexit by October 0

European Union chief negotiator for Brexit Michel Barnier has officially ruled out the possibility that the bloc and the United Kingdom could reach a deal on Brexit during an October summit.

Barneir said after a meeting with Britain’s Brexit minister Dominic Raab on Tuesday that a deal on how the UK will leave the EU would not be completed by the European Council summit in October as previously hoped.

“I’m not going to say October, a few days here, the beginning of November, but not much later than that,” said Barnier during a press conference with Raab in Brussels.

The French diplomat, who has been tough with Britain on the country’s recent proposals for Brexit, said there will be works to do on key issues like the Irish border while the two sides will need time to prepare a political declaration on the future relationship.

Raab was still hopeful a deal would come through during the EU summit although he admitted there remained differences on key issues.

“If we have that ambition, that pragmatism and that energy on both sides, I’m confident we can reach that agreement by October,” said Raab after the meeting with Barnier, adding, “There are still gaps, we’ve had an honest conversation about those.”

Fears have grown among the public that Britain could face serious shortage of foods and other basic items in case it fails to reach a withdrawal agreement with the EU.

May has said that there are still chances to avoid a no-deal Brexit but she insists that Britain would not accept a bad deal.