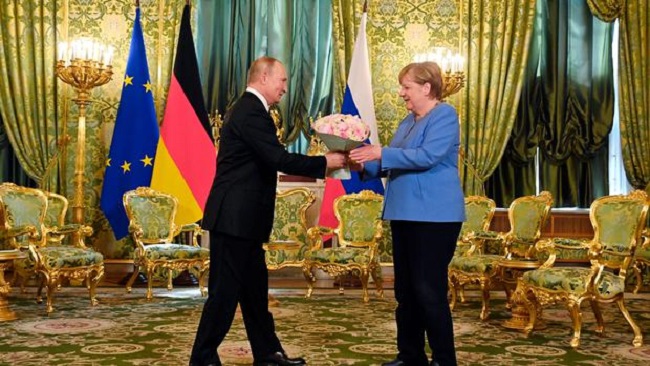 In her final visit to Moscow before stepping down as leader, German Chancellor Angela Merkel on Friday asked her Russian counterpart Vladimir Putin to free Alexei Navalny from prison on the anniversary of the opposition leader’s poisoning.

Merkel’s trip to Moscow comes exactly a year after a nerve-agent attack on the now-jailed Navalny, whose life was saved by Berlin doctors.

Her aides have made clear that the timing of the meeting is not accidental.

“I demanded from the Russian President that he free Navalny,” Merkel told a Kremlin press conference, standing alongside Putin.

The Russian leader referred to his challenger as “the defendant”. He denied Navalny was jailed for his political activity, saying he was behind bars for “criminal offences”.

“I would ask that the judicial decisions of the Russian Federation be treated with respect,” Putin said, claiming that Russia had an inclusive political system.

Earlier, the German chancellor said it was important for Berlin to continue engaging with Moscow, despite “deep differences” on a range of issues.

“We have a lot to talk about,” Merkel said, naming several issues on their agenda, including the Taliban takeover of Afghanistan.

Merkel, who grew up in communist East Germany, and Putin, a former KGB agent stationed there, speak each other’s languages.

During the chancellor’s 16 years in power, the pair always kept a dialogue despite strained relations, dampened by issues ranging from alleged cyberattacks to the conflicts in Ukraine and Syria.

Her spokesman Steffen Seibert said the attack had put a “heavy burden” on relations between the two countries.

This month he was charged with new crimes that could prolong his jail time by three years. If found guilty, he could only be released after 2024, the year Russia is scheduled to hold a presidential election.

In a message from prison posted on his Instagram by his team Friday, Navalny said the 20th of August – when he thought “he died” after losing consciousness on a flight over Siberia – was his “second birthday”.

He thanked his supporters for calling for him to be taken out of Russia for treatment.

“Thanks to you I survived and landed in prison,” he joked, adding “sorry, I could not help myself”.

Both Merkel and Putin said the crisis in Afghanistan had figured prominently during their talks.

In his first comments on the subject since the Taliban takeover, Putin said the world community should prevent the “collapse” of the country and ensure “terrorists” do not enter neighbouring countries from Afghanistan.

He said the world must accept the fact that the Taliban now control Afghanistan, criticising the “irresponsible policy” of imposing “outside values” on the war-torn country.

Merkel and Putin also discussed the simmering conflict in eastern Ukraine and the authoritarian crackdown in Russia-allied Belarus.

Germany has been a major player in efforts to broker peace in eastern Ukraine and Merkel expressed hope that peace talks on the conflict between Kiev and pro-Russia separatists would continue after she leaves power.

She told Putin that “even if the progress isn’t as fast as we hoped”, the peace talks should be kept “alive”.

Merkel is set to meet Ukrainian President Volodymyr Zelensky in Kiev on Sunday.