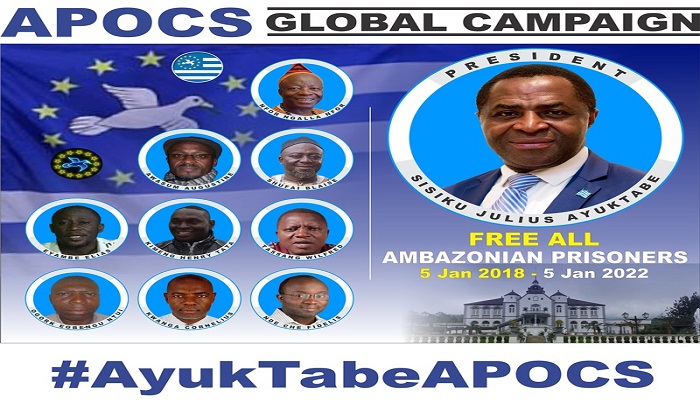 Federal Republic of Ambazonia: Release of NERA 10 is warranted on grounds of international law, justice, human rights, and humanitarian considerations 0

Summary of the profile of the NERA 10

The standing of the ten gentlemen

These are highly educated gentlemen with careers in significant niche areas. Most of them are University professors with distinguished academic credentials in disciplines such as veterinary surgery, structural engineering, architecture, and ICT. They have a track record of significant contribution in knowledge generation and in community engagement. These political prisoners also include two barristers-at-law and human rights activists, one teacher, and one political scientist. These prisoners of conscience are all, but for one, below sixty years of age. They are all married and have children. Their wives and children are under severe physical and emotional trauma and pain on account of the incarcerationof their husbands and fathers for no just cause. Finally, these gentlemen are all legally resident in Nigeria. Some are University professors for years. Some have refugee status. Others are registered asylum seeks.

The kidnap and hostage-holding of the NERA 10 contravenes provisions of the Nigerian and Cameroun constitutions. Both constitutions provide for freedom of association, assembly and speech.The law in both countries sets out procedures for arrest and detention. The law in both countries does not authorise arbitrary arrest and detention. It does not authorise kidnapping and hostage-taking. It does not authorise torture. The kidnapping, smuggling and incommunicado detention of the Nera 10 is not sanctioned by any judicial process. The law has been trampled on.The NERA 10 were simply kidnapped, held incommunicado for weeks, forcibly repatriated to Yaoundé at night under armed terror. While in Yaoundé they are further held incommunicado and without access to sunlight for over six months before being dumped in the insalubrious, squalid and cramped Kondengui prison.

Cameroun and Nigeria are parties to the Convention against Torture and Other Cruel, Inhuman or Degrading Treatment or Punishment. That Convention prohibits torture in all its forms. It further prohibits the deportation or extradition of persons to countries where there are good grounds for believing that they would be in danger of suffering it. Cameroun Republic has precisely such a lugubrious reputation.

The NERA 10 are all civilians. In violation of international law, they are put through the motion of a trial in a military tribunal and in a language (French) and legal system (French) the hostages do not understand.That tribunal acknowledged the protected status of the NERA 10 as refugees and asylum seekers legally resident in Nigeria. It acknowledged that the NERA 10 had committed no crime either in Cameroun or in Nigeria.The kidnapping and hostage-keeping of the Nera 10 is a matter with international dimensions. The tribunal nevertheless purported to assume jurisdiction to try them and went ahead to subject them to a pretended ‘trial’. French Cameroun’s apex court has maintained a studied and suspect silence over the appeal lodged in September 2019 by the NERA 10 against their ‘conviction’ and ‘sentence’. Even complaints filed with the United Nations Working Group on Arbitrary Detention in June 2019 remain unanswered to this day.

In Suit No FHC/ABJ/CS/85/2018 of 1March 2018, the Federal High Court of Nigeria held that the arrest and detention of the NERA 10 and their forced repatriation (‘refoulement’) to Cameroun constitutes gross violations of their fundamental human rights. The Court ordered the State of Nigeria to pay compensation to each of them in the sum of 5 million Naira each. It alsogranted a perpetual injunction against any further violations of their rights. Inthe related case ofSisikuAyukTabe and others v. National Security Adviser and Attorney General of the Federation of Nigeria(Suit No FHC/ABJ/CS/147/2018) the Nigerian Federal High Court at Abuja adjudged and declared:that the NERA 10 are legal residents in Nigeria, some of who have refugee status and others are registered asylum seekers; that their fundamental rights have been violated; that their forced repatriation to Cameroun is illegal; and that the Nigerian authorities are under legal obligation “to bring back the Applicants from Cameroun to Nigeria forthwith”. The Court went further to grant a perpetual injunction against any further violation of the fundamental rights of the Applicants, and to rule that the NERA 10 be paid damages, the amount of which the Court quantified. These two judgmentshave not yet been executed.

Risk of being murdered

There is well-founded fear of a plot to murder the NERA 10 in prison.In 2020, Kondegui prison officials brought unidentified persons into the prison to trail the NERA 10 political prisoners. In March of that year the said individuals broke into the cell-room of 3 of the Nera 10. They stole money and contaminated their food. The Nera 10 called for an investigation and for forensic analysis of the food samples for poisons. The prison authorities ignored and continue to ignore this request.Recently, over 75% of the inmates, including Barrister Shufai Blaise, complained of generalised malaise, lethargy, fever, sore throat, coughing, chest and abdominal pains. Shufai Blaise’s condition became severe and he collapsed. He was comatose throughout the last half of the night and was rushed to the military hospital. There, while on intravenous medications, he was forcibly restrained with both hands chained in a crucifying position and left to the nuisance of biting insects for days. Till date no one has bothered to test inmates for corona virus or give them appropriate treatment for any ailment.

Prisoners’ property still in the possession of Nigerian and Cameroun authorities

Detainees at SED are denied access to sunlight. They are locked up 24 hours a day. Detainees include children. Mistreatment is systematic.There is no soap for washing or taking a shower. Washing is a luxury.Detainees do not get proper food. They are under-fed. They are flagellated and otherwise systematically tortured in and out of the torture facility at that place. The SED gendarmes who carry out these bestial tortures have earned the dubious distinction of being Cameroun’s Gestapo.

The NERA 10 are held in Kondengui prison’scrowded, cramped and makeshift cells. That prison is overflowing with inmates. It holds more than ten times its original capacity. The conditions there are inhuman and worse than a nightmare. Inmates have something to eat only if family, friends or some charitable organisation brings them food. There is no regular drinking water, no washing facilities, and no medical care. The conditions are shocking. Some inmates have been there for years without trial. Some others have been reduced to just skin and bone. That prison is generally often dark. It is cramped, airless, disease-ridden, and provides wretched ‘food’. It is an extremely dreadful place. The prison conditions are miserable; in fact, horrible. They amount to general barbarous treatment and the degradation of inmates.

The tribunal militaire, an instrument of tyranny, repression and oppression

The Nera 10, kidnapped and taken hostage in Abuja at night using military force and smuggled into Yaoundé at night using military force, are persons of high standing in their communities and various professional fields. They are subjected to a pretended trial by French Cameroun’s infamoustribunal militaire.Since the 1960s, this political tribunal ‘tries’ even civilians – civilians accused of political and non-political offences. It is, has been, and continues to be,Yaoundé’s handy instrument of despotism, political vendetta and repression. This is done in defiance of repeated rulings by the Human Rights Committee and the African Commission on Human and Peoples’ Rights declaring as contrary to international law the systematic use of the military tribunal to try civilians. As early as 1964, the International Commission of Jurists had called on Cameroun to disseise or remove the jurisdiction of its miliary tribunal over civilians. (International Commission of Jurists, “Emergency Laws in the Federal republic of Cameroon,” 20 Bulletin of the International Commission of Jurists, September 1964, p.7). The NERA 10 have been given a sentence of life imprisonment. This sentence wasprescribedby the Yaoundé regime even before their ‘trial’. The life sentence in effect means a sentence to slow death given the disease-ridden and insalubrious conditions of Kondengui Prison.The NERA 10 are languishing and pinning away in that dreadful prison.The additional sentence to a fine is scandalous, all the more so as the amount exceeds even the annual budget of Cameroun.

Urgent appeal to the conscientious world: immediate and unconditional release of the political prisoners

We appeal to the conscientious world to use its best endeavours, individually and collectively, to secure the release of the NERA 10 (and other political prisoners arbitrarily seized and held by the Yaoundé regime). The Nera 10 are fine and highly educated gentlemen who have been kidnapped and severely tortured and are being held hostage for no just reason. They deserve to be released unconditionally without further delay. Their release is warranted on grounds of international law, justice, human rights, and humanitarian considerations.