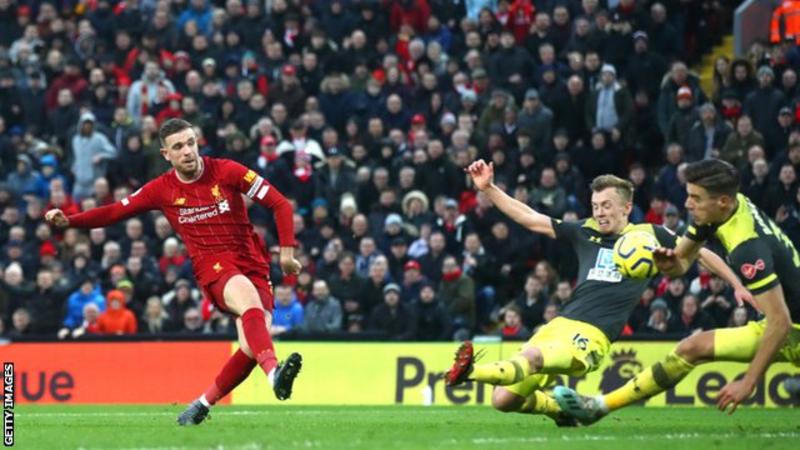 Football: Liverpool opens up the biggest lead by any team in English top-flight history 0

Liverpool opened up the biggest lead by any team at the end of a day in English top-flight history with an emphatic victory over Southampton – but manager Jurgen Klopp says his side are “not even close to being perfect”.

The Reds extended their advantage in the Premier League to 22 points over second-placed Manchester City, who face Tottenham on Sunday, with a 4-0 win against Southampton at Anfield.

They have also equalled City’s record of 20 consecutive Premier League wins at home and only Bill Shankly’s Liverpool team in 1972 had a longer winning streak on home soil in English top-flight history.

“We’re not even close to being perfect. We just look to use our skills in the best possible way. The boys have done that for a while pretty good and that’s why we have these numbers,” said Klopp.

Four second-half goals gave Liverpool a victory that extends their unbeaten run in the league to 42 games and means they have picked up 100 points from the last 102 available.

Alex Oxlade-Chamberlain scored the opener against Southampton just after half time – his second goal in as many league matches – when he drilled the ball low into the bottom corner.

Reds’ skipper Jordan Henderson made it 2-0 on the hour mark with a calm finish after being set up by Roberto Firmino.

Henderson then played in Mohamed Salah for Liverpool’s third and the Egypt forward added a fourth from close range in the last minute.

The scoreline was harsh on the visitors, who matched Liverpool for much of the first hour with Danny Ings going close in the first half and Shane Long also denied by home keeper Alisson.

It was Southampton’s first away defeat in five games and they fall to 11th place.

Liverpool’s wait for a first league title in 30 years will surely end this season. They have one hand on the trophy and seven wins from their remaining 13 games will guarantee success.

Liverpool are unbeaten in 42 games across two seasons, have conceded just one league goal in their last 10 matches and have 73 points from 25 games – a top-flight record.

Before Saturday, only City had won more consecutive games at home in the Premier League, between March 2011 and March 2012.

With only 13 matches left, it is increasingly surely only a question of whether Liverpool can remain unbeaten for the whole season rather than if they end their drought.

Nevertheless, their performance in the first half against Southampton was nervous and suggested the visitors could have a chance to inflict a first defeat on Klopp’s side.

Sloppy passes, mistakes at the back and a lack of intensity going forward meant the Saints had opportunities to score and were barely stretched at the back.

Southampton, spearheaded by top-scorer Ings in attack, finished the half as the better team, going close through the former Reds striker as well as Long and Moussa Djenepo.

But Liverpool, no doubt invigorated by a half-time talk from Klopp, were quick out of the blocks in the second half and as soon as they scored the victory that most will have expected before the match felt inevitable.

The scorer of that opener, Oxlade-Chamberlain, is starting to regain the form he demonstrated prior to picking up a serious knee injury while Henderson was magnificent again in controlling the midfield. They were solid at the back, with Joe Gomez and Virgil van Dijk’s centre-back partnership continuing to flourish.

The Reds were without the injured Sadio Mane, but Firmino and Salah delivered the goods; the Brazil striker produced a hat-trick of assists to take his total to 51 in all competitions for the club, while Salah scored twice.

Southampton manager Ralph Hasenhuttl said before the game he wanted his side to “show how far we have come, how competitive we are”.

They certainly did that, especially in the first half.

Ings, who left Liverpool to join the Saints for £20m in July, had scored 14 goals in 19 starts heading into the match and he was a threat throughout.

His close-range effort in the first half looked like it was heading in before it clipped the heel of team-mate Long and bounced away from goal.

The striker, who was praised for his tireless work ethic by Klopp, threatened early in the second half when he bundled into the box before being stopped by a challenge from Fabinho.

There were appeals for a penalty but it was reviewed by VAR, who must have decided it was the eager Ings’ effort to evade Fabinho that sent him to the ground rather contact from Liverpool’s midfielder – although Hasenhuttl believed it was a foul.

To rub salt into Saints’ wound, immediately after the incident Liverpool went up the other end and scored the opener.

Ings continued to cause problems though, earning a corner off a deflected shot after taking on Andy Robertson and Van Dijk as well as linking up with James Ward-Prowse, who fired just wide of the right post.

He was substituted in the 70th minute, alongside strike partner Long, and was given a standing ovation by the fans of his former club.

Ings’ form has been one of the reasons for Southampton’s surge away from the relegation zone and if he continues to be such a threat, Saints look good for a top-half finish in the table.

They had 10 shots in the first half against Liverpool, the most the Reds have faced in the opening 45 minutes of a Premier League match at Anfield since Chelsea in November 2014.

‘When we are rolling, it’s difficult to stop’ – what they said

Liverpool manager Jurgen Klopp: “The readiness to improve in the game and learn from the game [is what we had to do to win]. The set-up of Southampton I could not give more credit to. What a strange result in the end. It’s deserved because we score the goals, but what a team.

“They had too many shots on target and we had to change in the second half. That helped massively and when we are rolling it’s difficult to stop.

“Even when it was 4-0 Southampton did not stop and I have so much respect for that.”

Southampton manager Ralph Hasenhuttl: “Maybe the result is a little high but I would like to watch this game if we had gone a goal up. The best team in the world, for 50 minutes had no real chances and we had a massive one.

“It must be brave at that moment to say goal, so it’s no penalty here at Anfield. The way we played was unbelievably good and I am proud and stand by our plan. It is a clear penalty but in such moments the game can turn in our direction. But in the end it was a deserved win for Liverpool. We played the best we can so I am very proud.”

Liverpool’s first-team players will be given the night off on Tuesday for the FA Cup fourth-round replay against Shrewsbury, while their next Premier League match is against Norwich City on Saturday, 15 February (17:30 GMT).

Southampton travel to Tottenham on Wednesday for their FA Cup replay, before hosting Burnley in the Premier League on 15 February (12:30 GMT).