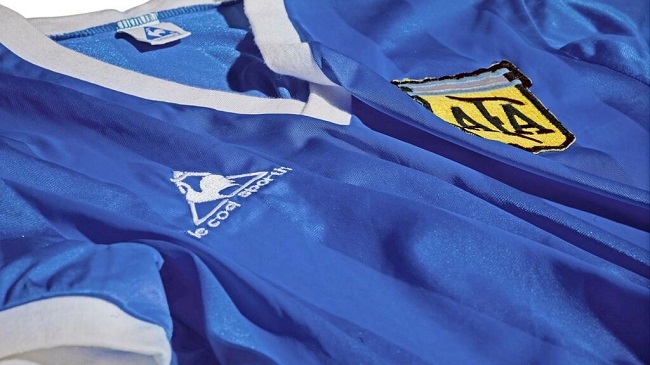 The jersey worn by Argentina football legend Diego Maradona when scoring twice against England in the 1986 World Cup, including the infamous “hand of God” goal, was auctioned for $9.3 million, a record for any item of sports memorabilia, Sotheby’s said Wednesday.

Maradona, regarded by many as the greatest player of all time, died of a heart attack in November 2020, aged 60.

Seven bidders vied for his iconic World Cup jersey in an auction that began on April 20 and ended Wednesday morning, Sotheby’s said.

“This historic shirt is a tangible reminder of an important moment not only in the history of sports, but in the history of the 20th century,” Sotheby’s head of streetwear and modern collectibles Brahm Wachter said in a statement after the sale.

“This is arguably the most coveted football shirt to ever come to auction, and so it is fitting that it now holds the auction record for any object of its kind,” he said.

Shortly after scoring the opener with his hand – the “hand of God”, as he famously coined it – Maradona followed up with a legendary run past England’s hapless defenders to double Argentina’s lead.

Maradona celebrates after scoring his second goal against England at the Estadio Azteca in Mexico City.

Maradona celebrates after scoring his second goal against England at the Estadio Azteca in Mexico City. © AP file photo

The outrageous one-two, which sealed Argentina’s quarter-final win over their bitter rivals, would define his career: the brilliance and the trickery, the prodigy and the myth.

The jersey had been owned since the end of the controversial encounter by England midfielder Steve Hodge, who swapped his jersey with Maradona after England lost 2-1 in Mexico City.

Maradona’s daughter cast doubt on the sale earlier this month when she claimed that the shirt put up for auction had been the one her father wore in the goalless first half, not the second when he scored his two goals.

Sotheby’s insisted they had the right shirt, though.

The previous record for a game-worn shirt from any sport was $5.6 million, set in 2019 for a jersey Babe Ruth wore while on the New York Yankees.