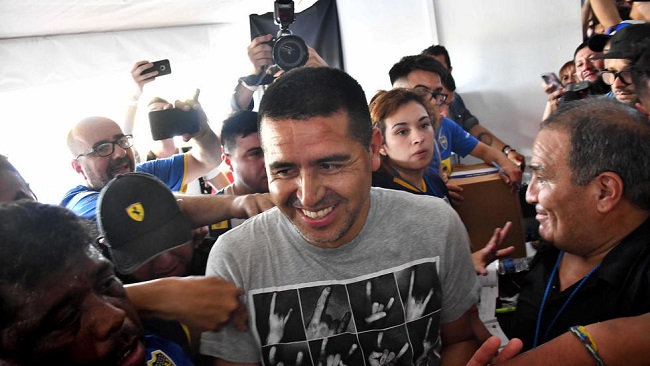 The list headed by Jorge Ameal, who was club president between 2008 and 2011, won 52.8 percent of the vote from Boca’s 84,000 members, bringing Riquelme into the 33-time Argentine champions’ hierarchy.

The 41-year-old stood alongside Ameal as prospective second vice-president and helped see off the faction supported by Maradona and powerful outgoing president of Argentina Mauricio Macri, which was led by Christian Gribaldo and only gathered 30.6 percent of the vote.

The list supported by Batistuta came in a distant third with 16.1 percent.

“It was a big party. Our fans voted for the love of the club colours, I’m satisfied,” said Riquelme after his side’s victory.

There has been bad blood between the pair since Riquelme snubbed Maradona, then Argentina’s coach, by refusing to come out of retirement for the 2010 World Cup, making it clear the refusal was personal.

Maradona, who is a hero in Argentina but won little with Boca, warned fans against voting for Riquelme’s faction, saying results would worsen on the pitch.

There was also a concerted effort by the previous club administration, backed by Macri, to block out Riquelme’s presence in the campaigning.

A photo showing him wearing the Boca number 10 was banned from the ballot paper, and the club warned fans ahead of election day that anyone wearing a Riquelme T-shirt would not be allowed to vote at the club’s Bombonera stadium.

However Riquelme’s support was key to Ameal’s victory as a highly successful playmaker for the capital city club.

He scored three times in the 5-0 aggregate win over Gremio to win their last Copa Libertadores in 2007, Riquelme’s third for the club and Boca’s sixth overall.

The new board’s priority will be to bring back the international lustre that Riquelme experienced as a player for one of South America’s biggest clubs.

The loss was second defeat for Macri in less than two months. He was Boca president from 1995 to 2006 and used that as a springboard to nationwide political success.

He became president of Argentina in 2015 as the head of his centre-right Cambiemos party, but his rule will end on December 10 after losing October’s presidential elections to leftist Alberto Fernandez.