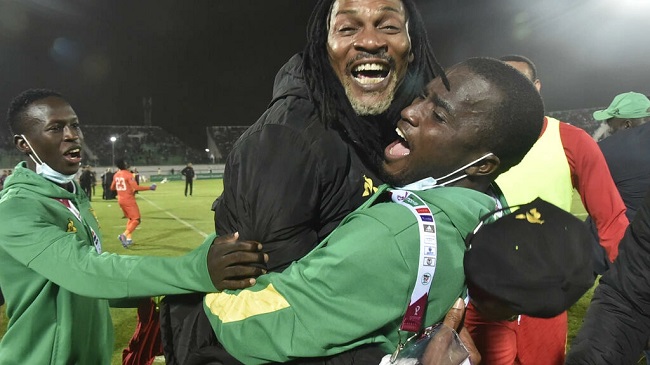 Cameroon, Ghana and Tunisia fired their coaches after unsatisfactory Africa Cup of Nations results this year, and the bold moves paid off this week with qualification for the 2022 World Cup in Qatar.

Hastily appointed Cameroon boss Rigobert Song saw Karl Toko Ekambi score in the 124th minute on Tuesday to snatch a 2-1 win over Algeria in Blida and victory on away goals.

Ghana coach Otto Addo endured many anxious minutes before a 1-1 draw against Nigeria in Abuja took the Black Stars through, also on away goals.

It was equally uncomfortable for Tunisia boss Jalel Kadri, whose side were held 0-0 at home by Mali but squeezed through thanks to a solitary-goal first-leg win last week.

With the World Cup play-offs coming just over a month after Senegal won the Cup of Nations in Cameroon, none of the new coaches were able to organise warm-up matches.

But they are now instant heroes in their nations as Cameroon look forward to an eighth appearance at the World Cup, Tunisia a sixth and Ghana a fourth.

Senegal and Morocco were the other qualifiers, in contrasting ways. Senegal edged Egypt on penalties while four-goal Morocco outclassed the Democratic Republic of Congo.

Soon after guiding Cameroon to a creditable third place as Cup of Nations hosts, Portuguese Toni Conceicao was sacked following the intervention of President Paul Biya.

Former Liverpool defender Song, the most capped Cameroonian with 137 national team appearances, was called up having never coached a senior team.

Losing at home to Algeria was a huge blow as the return match was in Blida, whose stadium is called the “slaughterhouse” given the frequency with which the Desert Foxes win handsomely there.

But Song convinced a team composed of professionals based across Europe that they could achieve the seemingly impossible.

“We learnt our lessons from the first match,” Song said. “Deploying two forwards rather than one was important.

“While tactics played a role in our second leg triumph, it was the mental attitude of the team that was most important.”

He succeeded despite the absence of captain Andre Ayew, who was suspended from both matches after being sent off in a stunning Cup of Nations defeat by minnows the Comoros.

Losing to debutants the Comoros plunged Ghana into crisis as they were eliminated after the first round and Serb coach Milovan Rajevac was sacked.

Addo restored self belief in a team containing a Premier League trio of Daniel Amartey from Leicester City, Thomas Partey of Arsenal and Jordan Ayew from Crystal Palace.

The 46-year-old was gracious in his moment of celebration, thanking his predecessors for the roles they played.

“There was a lot of work done before I took over. Thank you to former coaches Milovan Rajevac and CK Akonnor for their work. We are all in this together,” he said.

Kadri did have inside knowledge of Tunisia having assisted Mondher Kebaier, who was dumped after a Cup of Nations quarter-finals loss to Burkina Faso.

He must now plot a course that can take the Carthage Eagles beyond the first round at a World Cup for the first time.