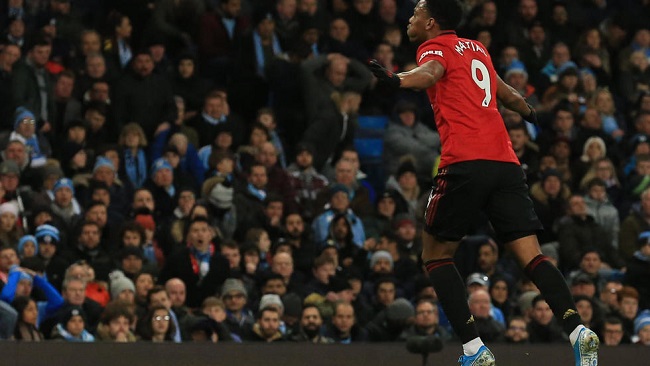 Manchester United landed another body blow to Manchester City’s hopes of retaining the Premier League title with a 2-1 derby win at the Etihad that leaves the champions 14 points adrift of runaway leaders Liverpool.

Marcus Rashford and Anthony Martial scored the goals for the visitors, who should have made the margin of victory even greater with a host of first half chances.

Nicolas Otamendi pulled a goal back to give City hope five minutes from time, but that was too little, too late for Pep Guardiola’s men, who suffered a fourth league defeat in 16 games.

United remain eight points adrift of their neighbours, but move up to fifth and within five points of fourth-placed Chelsea to haul themselves back into contention for a return to the Champions League next season.

City’s priority may also now be limited to securing a top-four finish with the gap to Liverpool growing by the week and a makeshift defence that has now failed to keep a clean sheet in nine games.

In the midst of another testing season for United, Ole Gunnar Solskjaer’s men have often saved their best for the toughest opposition having beaten Tottenham, Leicester and Chelsea and been the only side yet to take Premier League points off Liverpool.

City were powerless to stop the visitors pace on the break in the opening quarter in which United should have scored more than twice.

Ederson made a hat-trick of big saves to deny Daniel James, Jesse Lingard and Martial before United were awarded a penalty when Rashford was chopped down by Bernardo Silva inside the area.

Referee Anthony Taylor amazingly did not point to the spot in the first instance, but was quickly corrected by a VAR review.

Rashford stepped up to continue his fine form with a 13th goal in 14 games for club and country.

The 22-year-old’s 13 for United this season also matches his career-high for a single campaign and he should have had a couple more in the minutes after opening the scoring.

Firstly, Rashford curled an effort wide with just Ederson to beat form a fine pass by Martial before he fired another effort off the bar.

A United second was a matter of time as they continued to cut City open at will on the counter-attack and it duly arrived as James and Martial skipped around a host of half-hearted challenges before the Frenchman caught Ederson out at his near post.

City restored some semblance of order in the closing stages of the first half and should have been given a route back into the game by Gabriel Jesus when he headed Kevin de Bruyne’s inch-perfect cross wide.

The home side were also furious when Fred was not penalised for handball as he blocked Kyle Walker’s cross inside his own area with VAR this time backing Taylor’s decision not to give a spot-kick.

The Belgian’s driven effort was deflected over by a brilliant last-ditch challenge from Victor Lindelof before Rodrigo’s effort from De Bruyne’s layoff was tipped over by David de Gea.

United were suddenly rocking and De Gea had to make a brilliant save moments later to deny Mahrez an equaliser.

But they held out to round off a huge week for Solskjaer.

The Norwegian was facing questions over his future just six days ago after a 2-2 draw with Aston Villa left United with just four wins from their opening 14 league games.

However, victories over Jose Mourinho on his return to Old Trafford with Tottenham on Wednesday and now the side who have left United second best in their own city in recent times, massively relieves the pressure on Solskjaer.