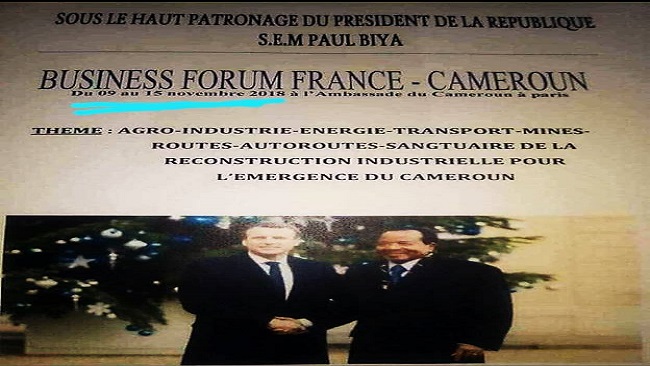 France-Afrique: Macron knows Biya will be president after October 7 0 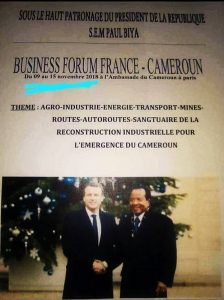 Looking at this flyer attached to this report, one must wonder what French President Emmanuel Macron will do if by some strange happenstance, Biya is not the president of Cameroon after October 7. Must Biya’s picture be included in the flyer? Will Macron still chair this forum with Akere Muna or Joshua Osih as president? Probably, Macron knows Biya will be president because in Cameroon, you cannot organize elections and lose.

What an irony. Fear of the Biya Francophone Beti Ewondo government and its many-tentacled security apparatus is greater now in French Cameroun than it was during the Ahmadou Ahidjo days. Why should that be when the Yaoundé regime has told the international community that it has generously offered dialogue with the English speaking people of Southern Cameroons now known as the Federal Republic of Ambazonia. However, anyone who has a mastery of the activities of the 85 year-old Biya and the barons of his ruling CPDM crime syndicate  from the inside is aware that the Yaoundé regime’s generosity and dialogue is to be feared above all things.

When peaceful calls for some political adjustments and reform by Anglophone lawyers and teachers were met by crushing violence from the French Cameroun government, the Francophone regime thought all was over. The bravery of the Southern Cameroons lawyers and teachers in breaching the French Cameroun gendarmerie fear barrier even to take part in such demonstrations is beyond admirable. Ever since French President Emmanuel Macron instructed Biya in Abidjan, Ivory Coast to use force, more than three thousand Southern Cameroonians have been killed by troops loyal to the regime in Yaoundé, thousands of Ambazonians have gone missing, hundreds have been detained in prison some never seen again and some 50,000 have fled to neighboring Nigeria. The UN says 161,000 Southern Cameroonians have been internally displaced. Hundreds of Southern Cameroonians have been killed recently over the decision to stage the October 7 presidential elections in the territory not even because they were demonstrating against the Biya Francophone regime but simply because they were in the wrong place at the wrong time.

The French sponsored French Cameroun counterfeit presidential election will be held on October 7 in Biya regime-held areas in French Cameroun- mindful of the fact that Boko Haram Camerounaise now controls part of the Far North region and part of the East region too is in the hands of the Anti Selaka rebel group from the Central African Republic. French Cameroun political elites including Biya and his gang know very well what it means. It is not so much an election – everyone including French President Macron knows the result after all – it is more like a head count of CPDM supporters. To be accurate, Macron knows Biya will be president because in Cameroon, you cannot organize elections and lose. To vote for anything other than the French Cameroun Monarch is to sign your own death warrant and that of your family.

ELECAM, the body responsible for guaranteeing Biya’s continued stay in power is in shambles. It is evidently clear that millions of French Cameroonians are not eligible to vote. Our London bureau chief who contributed to this report opined that Biya’s opponents may only win abroad if at all the embassies will host the dubious electoral process.

There are signs that the Francophone army is slowly but surely disintegrating on tribal lines. A senior military official from the Beti extraction reportedly told Southern Cameroonians and Northerners serving with the French Cameroun army that “If you are not for us, you are against us.” French Cameroonians living in France, the US, Germany, Canada, Belgium, Italy, Spain may dismiss the October 7 presidential election as plain fiction and a mockery of democracy. But fear is going to force thousands of French Cameroun civil servants and those operating in Cameroon’s funny private sectors in Douala and Yaounde to vote for Biya whose is currently enjoying himself in a Swiss Hotel in Geneva. For 35 years, the Biya regime has taken revenge on those whom it considered have betrayed it. In this October 7 presidential elections, even those who have done nothing and never taken sides will be at risk – all it takes is one fake security report written by one pro Biya security official who takes a dislike to you. It has already happened to several of many neutral Southern Cameroonians.

As it was in the beginning is now and ever shall be, the French government will use the presidential elections to its advantage. The October 7 presidential election plays beautifully into the French narrative of supporting “whoever is elected by the Cameroonian people” and legitimizes their unwavering support for Biya. More than 2 million Southern Cameroons and including some 4 million Fulanis in the Far North have lost their livelihood under Biya.