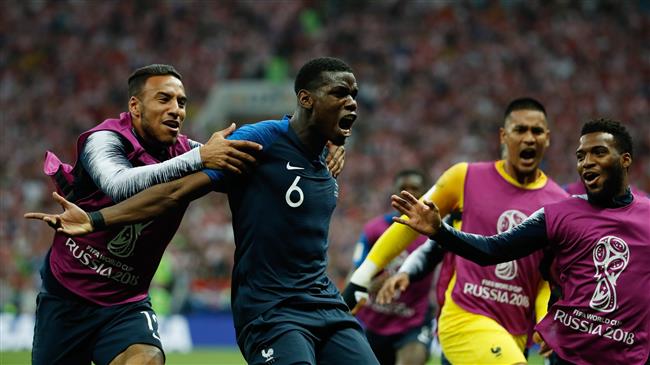 France has won its second World Cup in history by overcoming Croatia in an entertaining final of the 2018 version of the games in Russia.

A Mario Mandzukic own goal, a penalty by Antoine Griezmann that came from the VAR, and superb efforts by Paul Pogba and Kylian Mbappe in the second half of the game in Moscow’s Luzhniki Stadium on Sunday sealed France’s victory in one of the most action-packed finals of the World Cup.

Ivan Perisic and Mandzukic scored in either half of the game but the goals were not enough for a spirited Croatia to claim their first ever title in the prestigious games.

France lifted the trophy 20 years after they won the world Cup on home soil with captain by Didier Deschamps, the man who coached the current French team. Deschamps becomes the third man in the World Cup history after Brazil’s Mario Zagallo and Germany’s Franz Beckenbauer to win the games both as player and coach.

The 1998 French title also came at the expense of Croatia as the hosts had defeated the newcomers in the semi-finals.

The 2018 final was the most goal-packed in normal time in 60 years, only second in history to Brazil’s 5-2 win over Sweden in 1958. It was also the highest-scoring final since the 1966 final between England and West Germany, which ended with a similar score in favor of the hosts England.