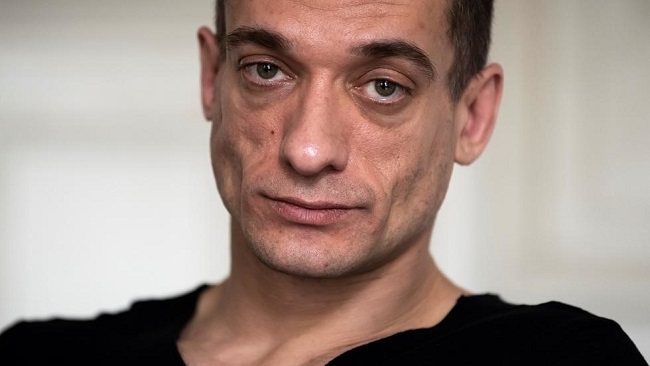 A Russian dissident artist who published screenshots of sexual images that forced President Emmanuel Macron’s candidate for Paris City Hall to pull out of the race was arrested in the French capital on Saturday, the prosecutor’s office said.

Benjamin Griveaux, one of Macron’s closest lieutenants, abandoned his bid to become mayor of Paris on Friday after it was alleged he sent sexual images of his genitals to a woman who is not his wife. Griveaux has not disputed that he sent the messages.

Pyotr Pavlensky, who has lived in exile in France, said he had posted the sex video to expose Griveaux’s « hypocrisy ».

The Russian artist is best known for works of performance art including nailing his scrotum to the ground in Moscow’s Red Square and setting fire to a door at the headquarters of Russia’s state security agency or the Bank of France.

The prosecutor’s office said Pavlensky had been arrested and held for questioning at a police station in central Paris in connection with another case about violence perpetrated on New Year’s Eve.

It added that Griveaux had filed a complaint on Saturday afternoon for privacy violation and that an investigation had been opened.

Officials at Macron’s party on Saturday were still discussing who should replace Griveaux and run under the party’s banner in next month’s mayoral elections, and expected to have a name early next week, the party said in a statement.