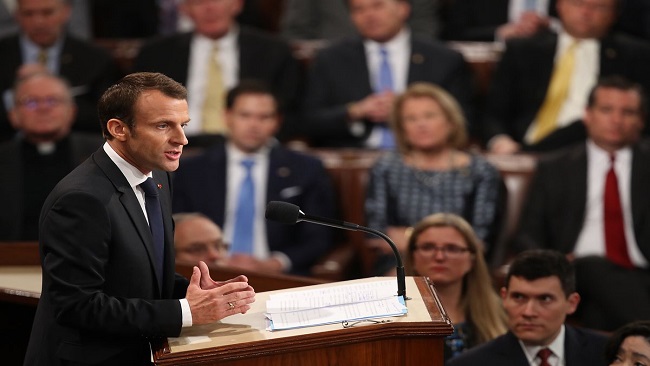 French President Emmanuel Macron says his country will not leave the Iran nuclear deal, known as the Joint Comprehensive Plan of Action (JCPOA), amid US efforts to persuade European parties to the agreement to withdraw from it.

Speaking at the US Congress Wednesday on the final day of a three-day state visit, Macron said the JCPOA was not addressing what he called “all concerns” but stressed that the deal could not be ditched.

“We signed it, both the United States and France.”

“We should not abandon it without having something substantial and more substantial instead. That’s why France will not leave the JCPOA, because we signed it,” he said.

He also vowed that Iran will “never” be allowed to develop atomic weapons.

“Our objective is clear. Iran shall never possess any nuclear weapons. Not now. Not in five years. Not in 10 years. Never,” Macron said.

Trump has often vowed to pull the United States out of the 2015 nuclear pact between Iran and the P5+1 group of countries, which was negotiated under his predecessor, Barack Obama.

Back in January, Trump said it was the last time he was extending the sanctions relief for Iran as part of the nuclear agreement, giving the European signatories a May 12 deadline to fix what he claimed to be the “flaws” in the agreement or he would refuse to waive those bans.

Iran has repeatedly warned that any failure to respect the multinational agreement would have grave consequences, stressing that there is no alternative to the nuclear accord.

Elsewhere in his remarks, the French president also warned against a trade “war” between allies and asked for a free and fair global trade.

“We need a free and fair trade, for sure,” Macron said. “A commercial war opposing allies is not consistent with our mission, with our history, with our current commitments for global security.”

Macron’s remarks came as US trade sanctions on European steel and aluminum will enter into force in coming weeks unless Trump agrees to sign a waiver.

On climate, Macron told US lawmakers there was “no Planet B,” acknowledging a disagreement with Trump, who pulled his country from the landmark Paris accord on climate change.

“Let us face it. There is no Planet B,” Macron said.

“We have disagreements between the United States and France. It may happen, like in all families,” he said but added that such differences would be short-term. “We’re just citizens of the same planet,” Macron said.

He said he was confident the United States “would come back and join the Paris agreement.”

Trump said last year that his country would withdraw from the accord, which aims to reduce damaging emissions and was signed by almost 200 countries.