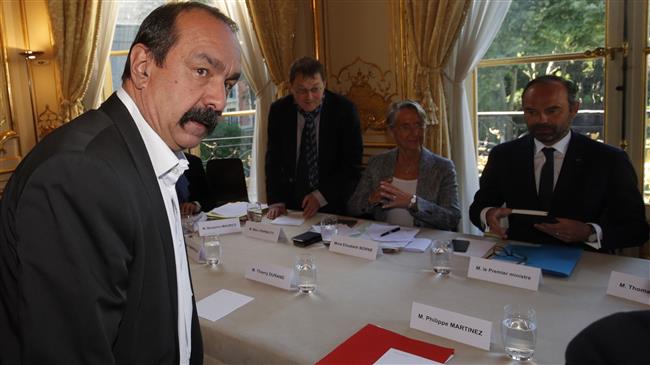 French Prime Minister Edouard Philippe has held meetings with senior leaders of labor unions as rolling strikes in the railway section continue to cripple services across the country.

Philippe sought to convince union leaders on Monday that the French government would work on mechanisms to settle debt claims related to state rail operator SNCF, an issue at the heart of the strikes that began on April 3.

One union boss said Philippe had expected that the SNCF would be able to pay its 46 billion euros ($55 billion) of debt by 2022 to reach a financial breakeven.

He said the premier vowed to make announcements on debt management before the end of May, but added that he failed to offer concrete proposals to put an end to the current strikes, which are mainly focused on SNCF’s plans aimed at ending its domestic passenger rail monopoly and scrapping hiring contracts that are more protective than other sectors.

Philippe Martinez, who leads the CGT union, and other representatives of the hard-line group, said after the meeting that nothing had changed as far as they saw, vowing that stoppages would continue for two days out of every five up to the end of June.

However, the CFDT and the UNSA unions said they would welcome initiatives by the government in the coming weeks. That could mean a crack in the united line of the unions during the strikes.

Laurent Berger, head of the CFDT union, who announced more details from the meeting with Philippe, said his union was also open to negotiation if the government showed genuine willingness to engage in such talks in the weeks ahead.

The French Senate is planned to discuss a law on the SNCF reform on May 29. President Emmanuel Macron, who came to power last year on promises of carrying out economic reforms, hopes the law, the biggest affecting France’s railway sector since nationalization in the 1930s, could bring him a major success at the end of his first of five years in power.